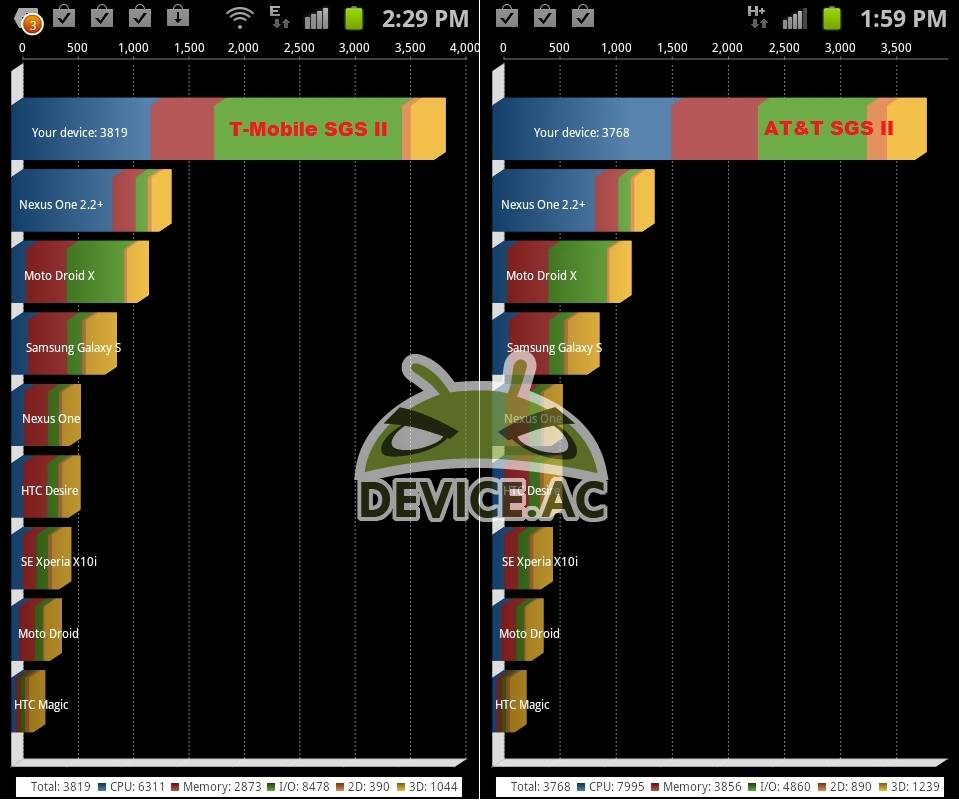 Today the Samsung Galaxy S II has just arrived for T-Mobile, while not available yet in stores we’ve been putting it through its paces and you can see our hands-on coverage here. We’ve also fully reviewed the AT&T Galaxy S II and that can be seen here. Today, just for a comparison we have a few screenshots of both running the popular benchmark Quadrant for everyone to enjoy, results can be seen below but lets just say this is one fast smartphone.

These phones are nearly identical (as are the other Galaxy S II’s) except the T-Mobile version comes with the Qualcomm 1.5 GHz dual-core processor and NOT the 1.2 GHz Samsung Exynos the AT&T and others carry. I was hoping to see a nice boost in performance from the upgraded processor but that just isn’t the case. Yes it is faster, but not by much. I ran a few tests on both smartphones and on average the T-Mobile SGSII scored around 3800. This is faster than any other phone on the market stock out of the box, so this is one extremely fast phone. It’s just the regular 1.2 GHz SGSII scores around 3700 stock, so the 1.5 GHz increase didn’t do all that much for performance, although I’m certainly not complaining.

Next I wanted to briefly mention the new HTC Amaze 4G, also with T-Mobile, we received it for some hands-on this morning too. The Amaze 4G sits nicely along with the Galaxy S II on T-Mobile and features the same 1.5 GHz dual-core Qualcomm processor. So what we have with the Amaze is a 4.3″ smartphone with the same 1.5 GHz processor, 1GB of RAM and all that jazz, yet it performs no where near as high as the Galaxy S II (in Quadrant at least). Some might say benchmarks don’t mean anything, and for many they don’t. As long as you have great overall performance that is smooth, fluid and runs great then who cares what the benchmarks say. The Amaze 4G scores around 2800 if its lucky in Quadrant, while the Galaxy S II scores around 3800. Pretty big difference right? 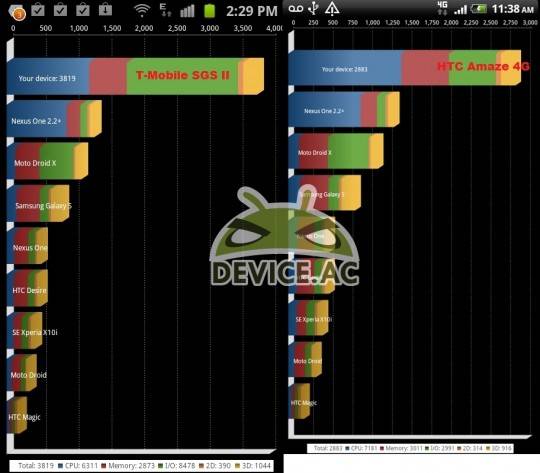 Clearly the HTC Amaze 4G with the same processor is severely lacking in regards to this benchmark. We could blame HTC, HTC Sense UI, or we could simply chalk this up to Samsung produces some excellent hardware and they tweak the OS to support the hardware at the same time. I’m not calling out HTC here, as Samsung has always performed very well in Quadrant results, but this just seems pretty crazy if you ask me. Could Sense UI cause benchmarks to suffer, although it makes the user interface smooth and clean, it’s a real possibility here.

This could also be because the EXT4 filesystem Samsung uses on their smartphones, if you look at the I/O performance, this is truly where Samsung shines and is able to squeeze out all that performance. Samsung scores 8400 while HTC scores 2900, as far as input and output performance Samsung clearly has an advantage here. I’m not going to read into all of this too much, and from initial thoughts both devices perform extremely well and just as a powerhouse dual-core smartphone should, I just thought I’d mention it for our readers. As a little bonus the DROID Bionic only scores 2700 in Quadrant with the TI OMAP 1.0 GHz dual-core it has on-board, just for a little more comparison.

What does everyone think here — Are benchmarks not nearly as important as we make them out to be? Or do they help sway your choices when considering a new smartphone? Feel free to leave a few thoughts or comments in the section below. We’ll have plenty of benchmark results from other apps in the full review of both these T-Mobiles phones coming soon, so stay tuned.

Full device specs can be found under the gallery below.