This latest handset is still unannounced by Samsung, however it looks like the company is prepping another version of the GALAXY S 4. And unlike the recently unveiled GALAXY S 4 Active and Zoom, this one should have a look similar to that of the regular model. The difference here will be in the network connectivity.

What we are seeing is coming by way of a recently discovered DLNA certification filing. The details point to a handset called the Samsung GALAXY S 4 LTE Advanced with a model number of SHV-E330. Or perhaps a bit more important here — a GALAXY S 4 with a Snapdragon 800 MSM8974 processor.

Basically, we are talking about a handset with support for the next generation of 4G technology. According to details coming from the Korean language dt.co.kr, this handset will have support for speeds of up to 150Mbps down. That brings us to the discussion of where the GALAXY S 4 LTE Advanced will be available — only for those in Korea. 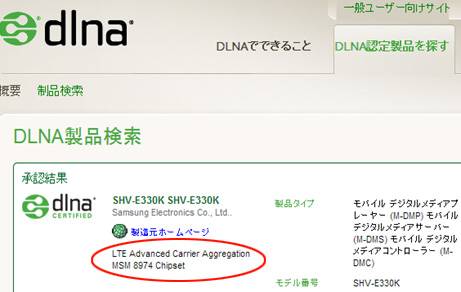 The handset is expected to arrive in July and the network support is said to be coming a month later, in August. Otherwise, the processor is expected to clock in as a quad-core 2.3GHz and the handset should also have support for VoLTE.

Aside from the new processor and support for faster LTE speeds, the GALAXY S 4 LTE Advanced should be arriving with a familiar set of specs. Basically, the handset will still have a 5-inch Full HD display, 2GB of RAM, 2600 mAh battery, 2 megapixel front-facing camera, 13 megapixel rear-facing camera and Android 4.2 Jelly Bean.