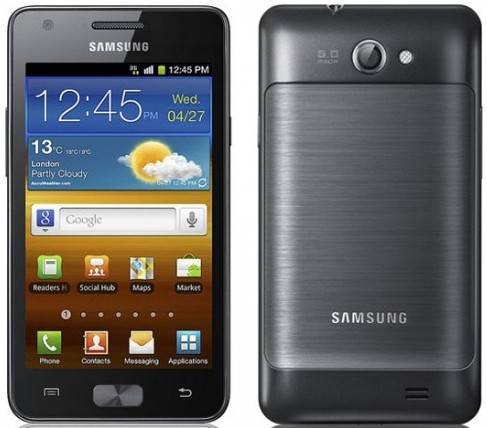 It’s time to get funky in the next Galaxy. We’ve got word directly from Samsung that this device, a device we’ve spoken about once with a few specifications without an official confirmation of its launch, then a lovely leaked intro video as played from the device itself. Now the full release is live! This device is the smaller brother of the Samsung Galaxy S II and it shows! Without a doubt inspired greatly by the original design (be it the Galaxy S II, the Infuse 4G, or perhaps even the Galaxy R itself,) Samsung has been thinking pretty hard about putting out a collection of devices that looks very similar but has better specs in certain places that make them all unique.

What this device features that’s different from the Galaxy S II is its processor and display. Instead of the magically delicious Samsung Exynos 4210 1.2 GHz dual-core processor, you’ll be getting the utterly mystical NVIDIA Tegra 2 1GHz dual-core processor. Which one shall win the benchmark race? Bets will be placed tonight! Then the other big difference between this R device and the Galaxy S II is the display. Instead of the brightest in the world Super AMOLED Plus, you’ll be running with a WWVGA Super Clear LCD.

Of course there are some other differences like the camera on the back of the device is no longer 8-megapixels, instead switching to 5, and we’re not sure, but it does appear that this device MIGHT not be running the newest version of TouchWiz. The thing is, this device might not even reach the USA, as it is foretold, Samsung only listing a few locations thus far including Europe (apparently the whole or Europe, as they’re not specific,” in July, then globally including South East & West Asia, Middle East Asia, and China.

Finally, as a final note, at the end here, the Galaxy R isn’t quite as thin as the Galaxy S II. With the Galaxy S II being the thinnest smartphone on the market at 8.49 mm, the Galaxy R barely misses it at a fat 9.55 mm. Also up for comparison is the Infuse 4G which looks like it came from the same mother and thickening up at 9 mm flat. Full specs on this Galaxy R device later today via Device.AC!