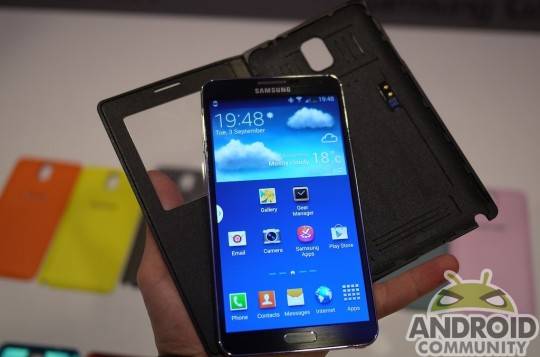 Samsung has just announced its Galaxy Note III smartphone as well as the much-talked about smartwatch device, the Galaxy Gear. Carriers are now rushing to get it to the hands of their customers as soon as possible, and it seems that T-Mobile and AT&T have planned to do so next month.

T-Mobile isn’t accepting pre-orders yet, but it has set up a registration page so that they can inform you when they do. Those who sign up before September 15 will automatically be entered into a raffle for a chance to win a Galaxy Note III and a Galaxy Gear. The Galaxy Note III will be carrying a price tag of $199.99 a month on T-Mobile’s Simple Choice Plan, down with 24 equal monthly payments of $21.00, while the Galaxy Gear will be sold for $299, plus fees and taxes.

AT&T, on the other hand, announced that it will start accepting pre-orders for the Galaxy Note III on September 6. Customers will be able to get the phablet for $35 per month via AT&T’s Next program. Otherwise, it will cost $299 with a two-year agreement. Unfortunately, the carrier has not made known any pricing or availability details about the Galaxy Gear except that it is coming soon.

T-Mobile has set a launch date for the new Samsung devices on October 2, while AT&T plans to start shipping orders by October 1. In the meantime, if you’re still undecided, you can read up on our hands-on of the Samsung Galaxy Note III and the Galaxy Gear to help you make a decision.