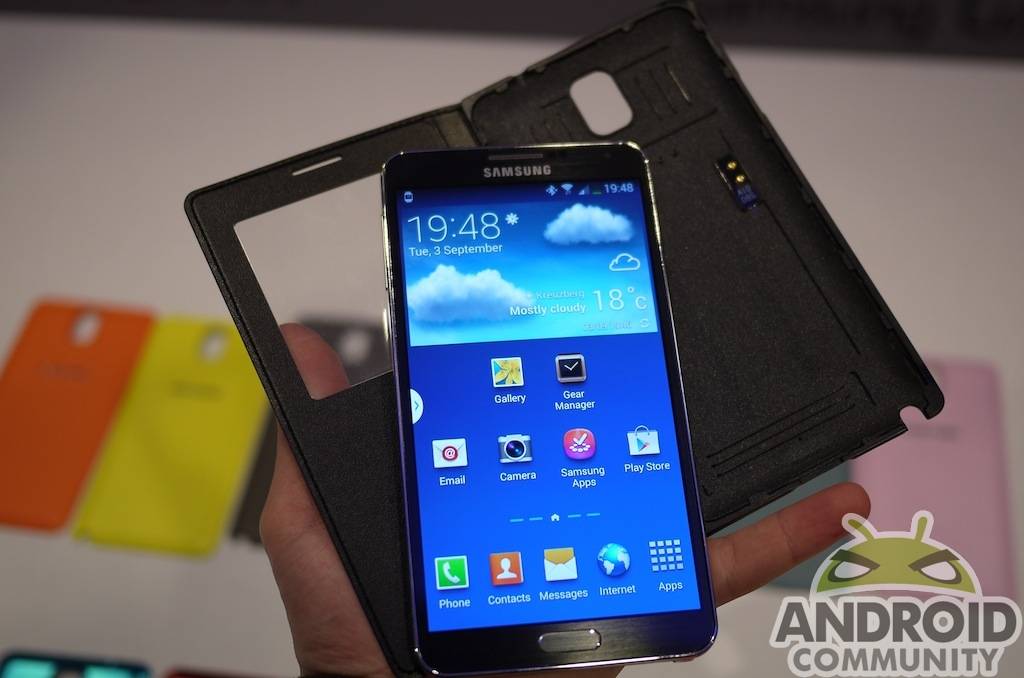 Putting an end to another series of rumors, Samsung has unveiled the Galaxy Note 3. As the name would imply, this marks the third-generation for the phablet and this time around we are seeing the continued support for the S Pen as well as goodies such as a 5.7-inch Full HD Super AMOLED display and quad-core processor. And just as the leaks and rumors were suggesting, that processor will vary by market.

The Note 3 will arrive running Android 4.3 and just like they increased the size of the display — the also upped some of the other specs. The Note 3 will have 3GB of RAM, a 3200 mAh battery, up to 64GB of internal storage and a 13 megapixel rear-facing camera. While much of the specs have been bumped and the display is larger, Samsung managed to have the Note 3 come in a bit slimmer and lighter (as compared to the Note II).

The Galaxy Note 3 measures in at 151.2 x 79.2 x 8.3 mm with a weight of 168 grams. The back cover is still able to be removed, which means the battery is still able to be swapped out if needed, however those moving from the Note II to the Note 3 will notice a difference on the backside. Samsung has added a leather-textured, soft-touch back panel. This leather back cover does make the handset a bit easier to keep tight in hand and otherwise the Note 3 is outlined with metal-finish edges. 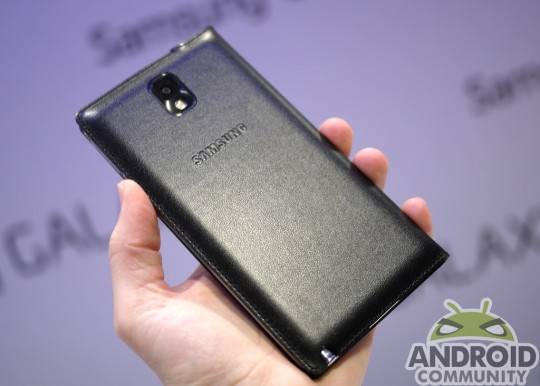 Shifting back to the front of the device and that display is one that has a resolution of 1920 x 1080. Again, the display measures in at 5.7-inches. Overall the display has good viewing angles as well as great colors and strong brightness levels. In addition to the 13 megapixel camera on the back, that one brings an LED flash and the ability to capture 1080p video. The Note 3 also has a 2 megapixel front-facing camera.

As far as the connectivity goes, those looking towards the Note 3 will find LTE (Cat 4; up to 150/50Mbps down/up) with support for up to six different bands for the various markets the handset will be available. There will also be HSPA (up to 42Mbs) along with WiFi 802.11 a/b/g/n/ac and Bluetooth 4.0 LE. Other items here include NFC, an infrared blaster and a variety of sensors to include accelerometer, digital compass, gyroscope, proximity, barometer, temperature and humidity.

The storage options include 32GB and 64GB. The handset will also have a microSD card slot for anything additional. Aside from the changes in the hardware, perhaps one of the bigger points here comes in with the S Pen. The Note 3 will have a palette of options (called Air Command) that opens when you remove the S Pen from the slot or when you hover and click on the pen’s side button.

The S Pen options in that palette include Action Memo, Scrapbook, Screen Write, S Finder and Pen Window. Samsung also made some improvements to S Note and Multi Window and the handset will arrive with support for Samsung KNOX and Find My Mobile. Some other software related goodies include My Magazine which is similar to Flipboard and an improved Group Play.

Shifting away from the device and we find a new windowed case that has a rather large opening on the front. This gives access to the touchscreen and allows the user to see notifications, browse the calendar, run apps and more. This case will be available in a variety of colors and with interchangeable back panels. There will also be some without the front window opening.

Finally, Samsung has said the Galaxy Note 3 will be coming to more than 140 countries. Availability will begin from September 25th and the US release is expected “later this year” with carriers to include Verizon, AT&T, T-Mobile, Sprint, and US Cellular. And as one would expect, the price has yet to be revealed.