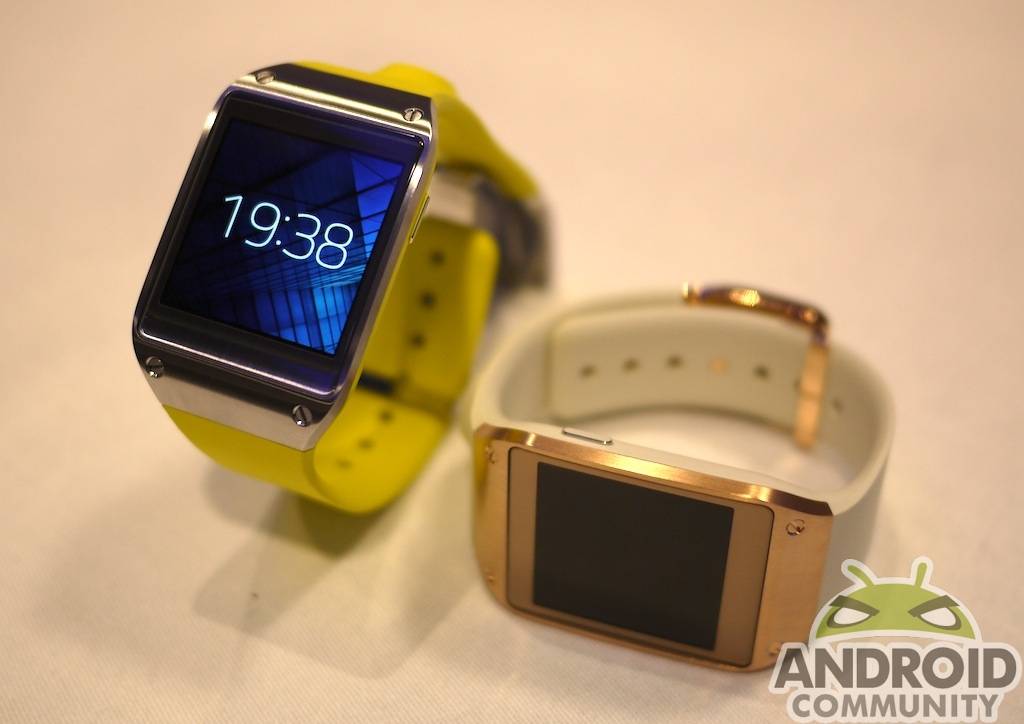 That camera has macro mode, twin microphones, noise cancellation and is able to capture Full HD video. The watch also has a speaker, which is built-into the adjustable clasp. Samsung has the watch sitting with sapphire glass, a metal frame and non-removable plastic band. While a removable band would have been nice, this is limited due to the electronics that run through it.

The Galaxy Gear measures in at 11.1mm thick and weighs in at 73.8 grams. Overall the watch feels solid and given the metal frame and sapphire glass it should be able to take a few bumps without much to worry about. That non-removable band also brings another point to consider — the color. Samsung will have the Galaxy Gear available in Jet Black, Mocha Gray, Wild Orange, Oatmeal Beige, Rose Gold and Lime Green.

The hardware inside includes a 315 mAh battery and the charging is done with an included cradle. Samsung also packed in 4GB of storage along with an 800MHz Exynox processor and 512MB of RAM. The watch will connect to the handset using a Bluetooth LE connection and is running a custom version of Android. Using the watch will be done with gestures. These include tapping the home button or raising your wrist to trigger the accelerometer. 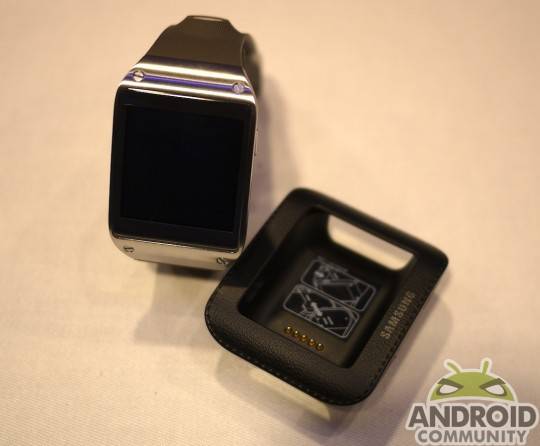 Other gestures include being able to tap the screen to take a photo, then shake to share that photo and a downward swipe will access the camera. There will be 10 pre-loaded watchfaces. As far as the Galaxy Gear being a companion to the Galaxy Note 3 — this will be done using the Gear Manager app. That app will be notification manager and also allow the user to install smartwatch apps. The initial pairing is done with NFC and then uses Bluetooth. One interesting connection to the phone comes with “Find My Phone” which can be triggered from the Galaxy Gear.

Samsung will have the Galaxy Gear acting as a pedometer out of the box and there will also be a connection to the S Health setup. Samsung has also said third-party app support will come from others such as RunKeeper and MyFitnessPal. Aside from the gestures and movements, the Galaxy Gear will also be controlled using S Voice.

With that, similar to the Galaxy Note 3, the Galaxy Gear will be available from September 25 and arriving in more than 140 countries. Samsung has yet to announce any pricing, however they have said the watch will have support for other Galaxy devices “soon” and that there are “no current plans” to bring compatibility to other devices.