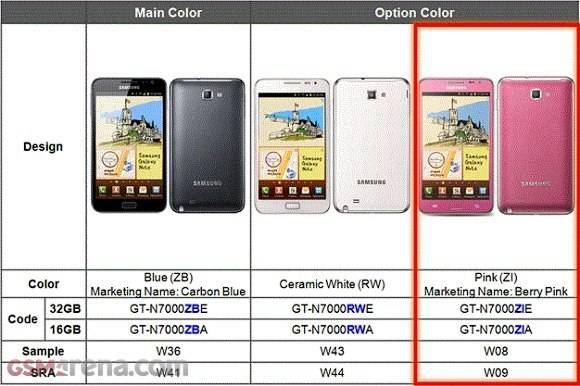 You know, there’s only one thing that might make a gigantic 5.3-inch, 720p Super AMOLED phablet with high-end specs and great battery life even better: a more feminine touch. That seems to be Samsung’s thinking, anyway: GSM Arena spotted a Berry Pink variant of the Galaxy Note hanging out on some non-specific internal materials, sitting pretty next to the standard Blue and optional Ceramic White colors. According to the document, the pink version will launch in Week 9 (February 26th-March 3rd) narrowly and tragically missing Valentine’s Day.

There’s no word on which market will receive the blessing of a pink Note, though considering the button configuration it’s almost certainly not AT&T in the United States. Previously Samsung has had a habit of releasing pink phones only in Korea and a few other Asian markets. Given the timing, it’s likely that the pink Note will be shown off at Mobile World Congress, possibly next to the blank spot where the Galaxy S III isn’t. If Samsung’s pattern holds true, it won’t be any more or less expensive than its more conservatively colored models.

If I may indulge in some gender stereotypes: Samsung previously indicated that it was aiming the Galaxy Note squarely at female consumers, at least in the UK. A pink version revealed relatively quickly after the launch would seem to confirm this. Samsung executives have said that they think oversized smartphones would appeal to women in particular, since their large size would be negated by a purse or handbag. That being the case, we might see a pink version show up in Europe or the US sooner rather than later.