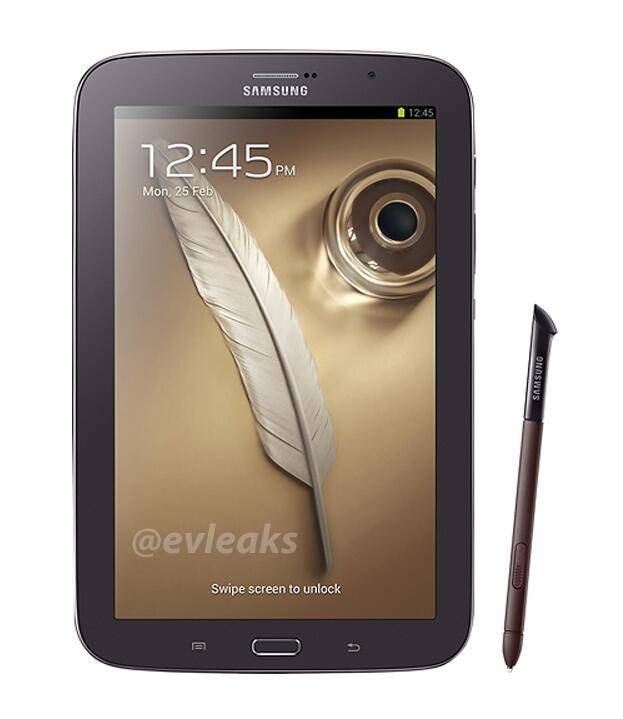 Today we’ve received a few different leaks regarding upcoming products from the folks at Samsung. Earlier today Samsung themselves accidentally revealed the upcoming GALAXY S 4 Mini, and now we’re getting our first look at the Amber Brown edition of their Note 8.0 tablet. Samsung’s slowly been adding more colors to all their devices, and this looks to be the next in line.

Last week while announcing the GALAXY S 4 has already sold over 10 million units, they also confirmed a few new colors for the smartphone, including Amber Brown. And now it appears they’ll be offering at least one more color for their Note 8.0 as well.

Renowned and popular leakster @evleaks revealed the new version this weekend, as well as a Pink Note 8.0 tablet, but that’s all we know at this point. The companies new mid-range tablet complete with their popular S-Pen stylus will be getting a colorful refresh. We can also assume a slew of accessories will also match the new color, but Samsung hasn’t revealed any details.

Earlier this month there was a rumor about a “brown black” Note 8.0, so this could be what that rumor was referring to. The slate comes in a sleek all plastic design, similar to the Galaxy S 4, and eventually we’ll get more colors, basically. Samsung hasn’t announced anything officially, so we’ll update when we hear more.

In the meantime check out our Galaxy Note 8.0 Review and let us know if you bought one in the comments below.