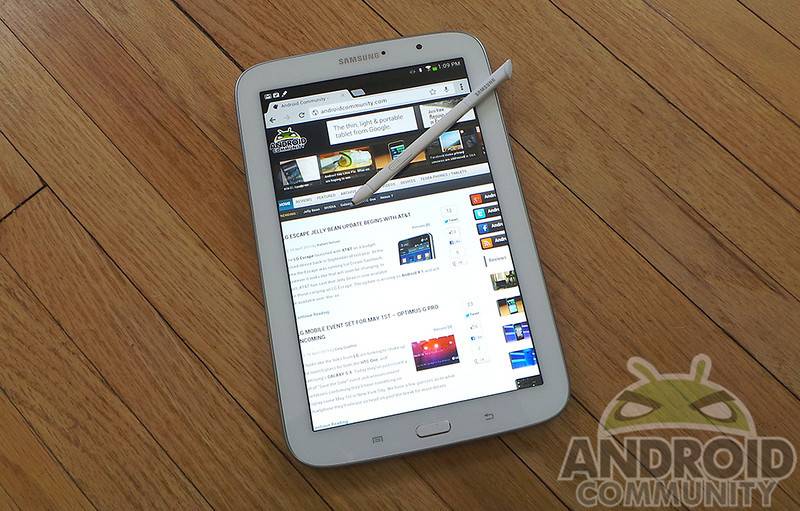 Samsung has had a place in the mid-size tablet market for a while now, and their newest piece of machinery takes things to a new level. The Galaxy Note 8.0 is the happy medium between the company’s Galaxy Note 10.1 and the 5.5-inch Galaxy Note II, and we first took a look at the new device during Mobile World Congress back in February. It comes with the infamous S Pen, as well as a quad-core processor to keep things humming along nicely. However, the tablet starts at $400, which is a bit expensive compared to other tablets in the same playing field, which makes us wonder what’s so special about this specific slate. Let’s take a peek.

As you can probably guess from the name of the device itself, the Galaxy Note 8.0 rocks an 8-inch 16:10 display at a resolution of 1280×800, which is a bit low considering that even smaller screens sport the same resolution. However, it has a pixel density of 189 PPI, which is just slightly more than the iPad mini’s 162 PPI. When looking at the screen from an average distance, text is really sharp, and images show up extremely crisp, but it certainly won’t be as good as higher-density tablets like the full-size iPad or the Nexus 10. 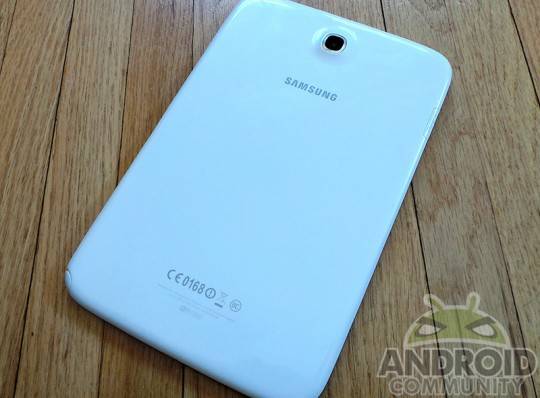 As for the design of this new slate, it pretty much looks like a larger version of the new GALAXY S 4, complete with the silver trim around the edges. The body is mostly plastic, including the silver trim, which makes the Galaxy Note 8.0 feel slightly on the cheap side, but the plastic build keeps it light for those who don’t quite want to carry around a brick. The power button and the volume rocker sit on the right edge of the tablet, with an IR blaster nestled right below that. The headphone sits at the top, while a microSD card slot is located on the left side. The microUSB slot and the speakers are both situated on the bottom, and just as with most of Samsung’s mobile products, the tablet has the elongated home button down toward the bottom, as well as the Menu and Back soft keys that illuminate in white. 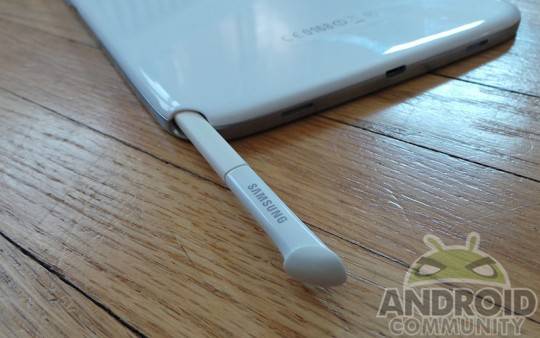 While the Galaxy Note 8.0 is a whole inch larger than those 7-inch varieties, it still feels like a 7-inch tablet when wielding it around. Holding it with one hand doesn’t feel too cumbersome, although I’ve been accustomed to simply grasping one edge of the tablet instead of trying to hold it like a smartphone, which has been working out quite nicely, although my grasping hand does get a little tired after a while. It’s merely a device to quickly pull out while you’re waiting for the train, or a device to use in bed at night or in the morning. It’s certainly not something that you can run around with like a smartphone, but it feels much more compact than a 10-inch slate. 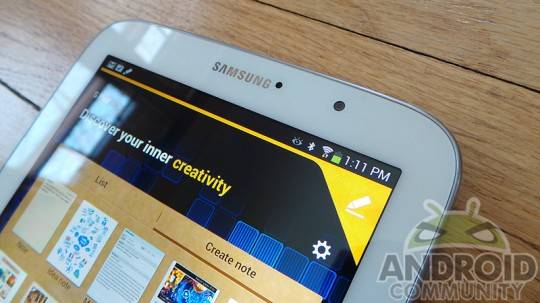 As for the S Pen that’s provided with the tablet, it allows users an extra level of productivity, letting them to take notes like they would with a normal pen and paper combo, only this time it’s all digital. Furthermore, the pen comes with a feature called Air View, that allows you to preview notes and have a peek at what’s inside a folder by hovering the pen over the object. This also works in some third-party apps like Flipboard, where you can hover a category to glance over some of the more important news items in that category. 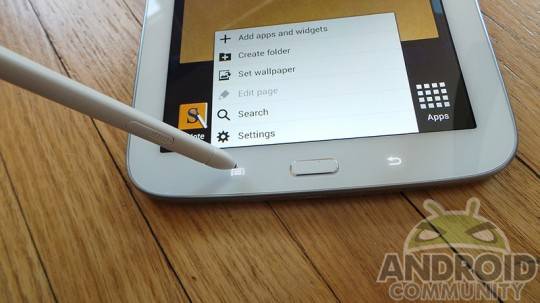 The only Galaxy Note 8.0 version that’s available in the US is WiFi-only, with the international version getting 3G capabilities as well as a radio chip to make phone calls and send/receive text messages. There’s also said to be a 4G LTE version incoming sometime later this year, but we’ve yet to hear about a release date or pricing info on that, and buyers will only be able to pick up a 16GB version of the tablet in the US, with a 32GB option available in other parts of the world.

The Galaxy Note 8.0 runs Android 4.1 Jelly Bean right out of the box, which means you’ll have all of the new goodies in this latest iteration, such as Google Now, improved notifications, and a slew of performance enhancements thanks to Project Butter. However, Samsung has also added a handful of their own apps to the device, turning the tablet into both a productivity device, as well as an entertainment hub.

S Note is Samsung’s own note-taking app, and it works seamlessly with the S Pen. You can type notes, write notes, and even doodle pictures while you’re sitting in on that board meeting at work. The S Pen is extremely responsive, and while we noticed just a tiny bit of lag, it didn’t take away from the experience one bit. Then pen is also pressure sensitive, so you can press down hard to bold your writing, or draw some streaks with a very light touch. 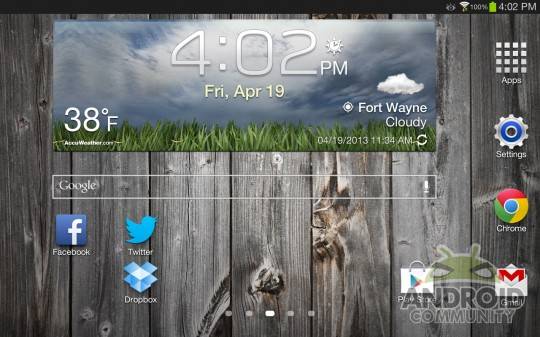 There’s also Multi-Window Mode, where you can view apps in a split-screen format and adjust the size of each window. This can be great for taking notes of an article on a website, or simply keeping up with your Twitter feed while you watch YouTube videos all day. Only a certain number of apps are capable of running in Multi-Window Mode, but many of the ones you’ll want it for are supported, so you shouldn’t have too much trouble there. 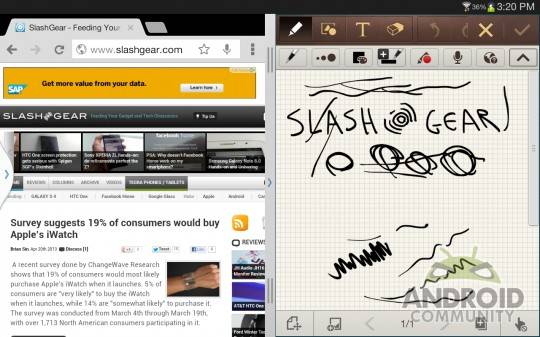 Other Samsung apps include Group Play (where you can share various types of files with other Samsung users over a WiFi network), WatchON (a TV guide app of sorts with a built-in universal remote control that uses the tablet’s IR blaster), S Planner, (Samsung’s own calendar app), and S Voice (Samsung’s own voice assistant, similar to Siri and Google Now). Of course, if you’re not a big fan of these apps, third-party developers usually do a good job of offering alternatives in the Google Play store. 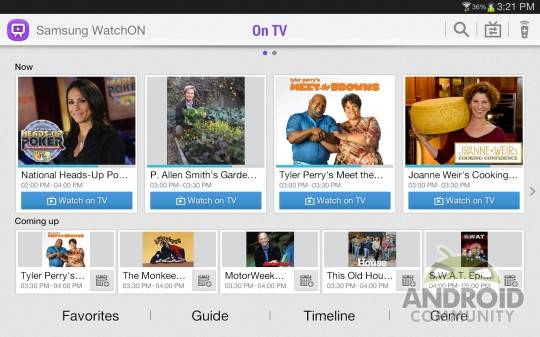 One feature I found really helpful, however, was Reading Mode, which you can apply to certain reading apps like Flipboard, Google Play Books, and Kindle. Whenever these apps are open, the tablet will automatically adjust the color temperature and brightness of the screen to optimize it for reading, that way your eyes don’t burn from looking at the screen for long periods of time while you make your way through that Dean Koontz novel. Of course, Reading Mode doesn’t replace the ultimate reading experience that a dedicated e-reader provides, but it certainly works if you’re not willing to spend the money to get a separate and dedicated e-reader.

The Galaxy Note 8.0 sports a 5 MP rear-facing camera with a 1.3 MP front-facing shooter for video chatting. The rear camera doesn’t have an LED flash, so you’ll have to make doubly sure that the photos you’re taking aren’t in low light, else they’ll turn out really dark and unusable. As for photo quality goes, it’s certainly not terrible, but avid photo snappers may not be too impressed. Macro abilities are pretty good, but even with good lighting, photos can turn out fairly grainy and noisy. The front-facing camera isn’t any better, and it may not garner the selfie quality that you’ve been yearning for, but it gets the job done when it comes to video chatting and such.

Video quality was more of the same — not bad, but not great, although auto-focus was practically non-existent. The camera wouldn’t auto-focus when closing in on a subject, so we had to keep tapping on the screen to get it to focus manually. Auto-exposure worked fairly well, though, and the white balance adjusted as expected. Have a look at both the sample photos and a video below to judge for yourself.

The Galaxy Note 8.0 runs on an in-house quad-core Exynos 4 processor clocked at 1.6GHz with 2GB of RAM, which makes the tablet cruise along quite nicely. According to benchmarks, the Galaxy Note 8.0 is about as fast as the Galaxy S III and the HTC One X+ in AnTuTu (scoring 16,900), and compared to the Nexus 7, the Note 8.0 scored much higher than Google’s variety, including the Nexus 10. 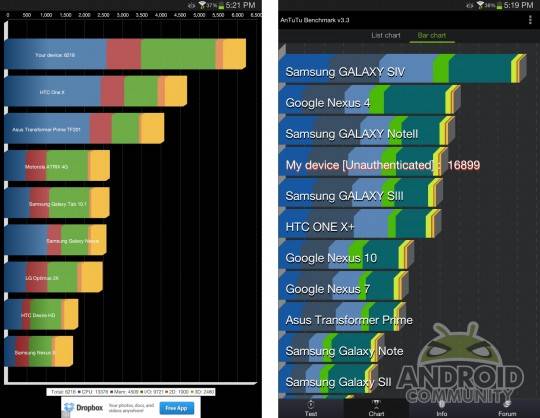 As for benchmark results in Quadrant, the tablet scored just over a 6,200, beating out the HTC One X, the ASUS Transformer Prime, and the Galaxy Tab 10.1 by a landslide. That certainly makes sense, as the tablet opened apps extremely quickly, and we were able to navigate through menus with cat-like tread. However, the keyboard was one of the only aspects that we thought could’ve used some speed improvements. We felt typing to be a bit laggy at times, and sometimes the keyboard would freeze for about a second before it would pick back up again. Of course, you have many keyboard alternatives at your disposal — SwiftKey being one of our favorites — so if you also find the default keyboard a bit lacking, you can change it around. 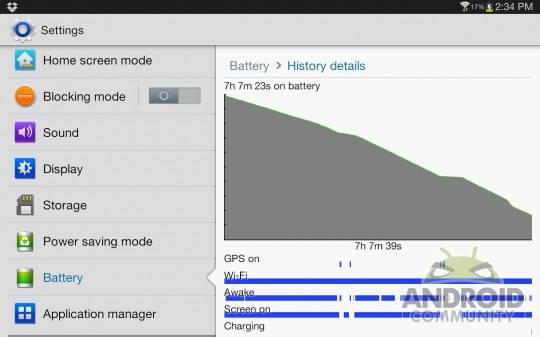 As for juice capacity, the Note 8.0’s 4600mAh battery ended up lasting just over seven hours before the meter dipped below 20%, and this was with constant, heavy use all day long. We watched Netflix shows on it for a few hours, played some games, took photos, and browsed our way through many of the apps. We reckon that most casual users will be able to go all day long and even into the next day before having to plug it in, with heavy users like us being able to most likely make it through an 8-hour work day.

The Galaxy Note 8.0 is a great tablet, and we certainly would rank it up there among the other small form-factor slates like the Nexus 7 and even the iPad mini, but the $400 price tag is a hard pill to swallow. With the Nexus 7 costing only $200 and the iPad mini at $330, the Galaxy Note 8.0 is a really expensive tablet. However, you’re paying for the S Pen stylus, which is a piece of technology that’s rather simple, but it offers a unique experience that you can only truly take advantage of on Samsung devices. Plus, if you already have a Samsung smartphone or are planning to grab the GALAXY S 4, the Galaxy Note 8.0 would be a perfect tablet companion.