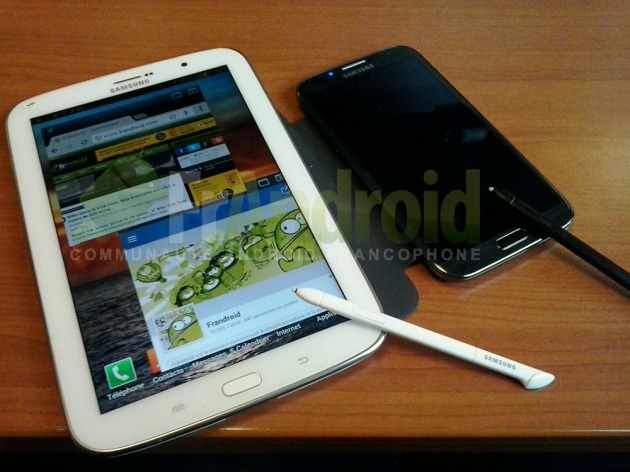 The Galaxy Note 8.0 is shaping up to be one of the worst kept secrets that we have seen in some time. The leaks have included everything from specs to rendered images to real world images. As of today, it looks another in-the-wild style image has surfaced. We should also mention right up front, this latest has kept the same form factor and looks that we have been seeing.

Simply put, is is beginning to look more and more as if we are seeing a final design. Of course, things can and sometimes do change, which means we still need to get the official details from Samsung. Those details are expected during MWC which means we still have a few weeks to wait, and likely — another few weeks of leaks to watch.

That all being said, this latest image leak has the Galaxy Note 8.0 sitting beside the smaller Galaxy Note II. As a side note, we didn’t see the day where we would refer to the Note II as being smaller and while we are technically talking about a tablet and a phone, the comparison somehow seems fitting given the similar looks. Also, this image should be nice for those who are fans of the S Pen as this is the first time we have gotten a full look at that.

Otherwise, as mentioned, we are expecting Samsung to announce the tablet during Mobile World Congress. So far the specs are looking to include a Super Clear LCD display with a resolution of 1280 x 800, quad-core processor, 2GB of RAM, a microSD card slot, 4600 mAh battery 1.3 megapixel front-facing camera and 5 megapixel rear-facing camera. Finally, the Note 8.0 is expected to arrive with Android 4.2 Jelly Bean and options for either 16GB or 32GB of internal storage space.