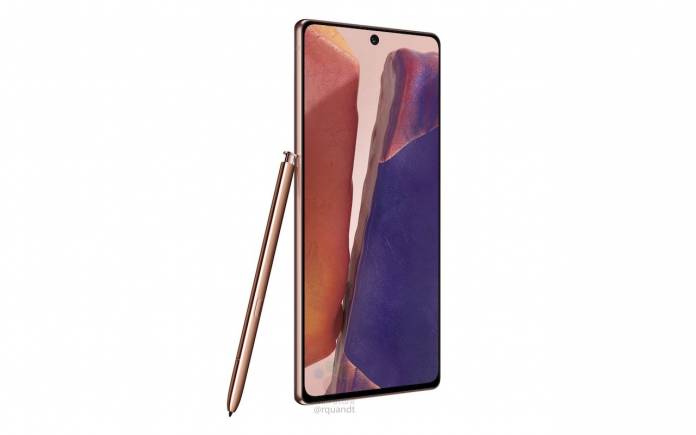 Here is another set of image renders of the upcoming Galaxy Note 20. We can say this is closer to the real thing which we will see on August 5 during the Unpacked 2020. The online-only event will be a launching pad for five new devices from the South Korean tech giant. The lineup includes the Galaxy Note 20 series, Galaxy Z Fold 2, Galaxy Z Flip 5G, Galaxy Tab S7, and the Galaxy Watch 3. A new pair of Galaxy Beans or Galaxy Buds Live may also be introduced.

Renders of the Ultra variant of the Galaxy Note 20 were also shown off yesterday by WinFuture. Master Leakster Roland Quandt is once again generous with information. The past few months have been busy for Samsung and industry watchers. Despite the lockdown in major countries around the world, there is no stopping the top mobile OEM from coming up with the next premium flagship smartphones.

The first half of the year may be unfortunate for tech companies and almost everyone around the world but Samsung wants to bounce back soon. Hopefully, the new Galaxy Note 20 phones will help.

The Galaxy Note 20 will obviously be smaller compared to the Ultra model. It will still come with S Pen support, as well as, the new Xbox streaming optimization. It will be the “more affordable” phone between the two but we still don’t know how much the devices will be. A 5G version will also be available but for those who only want a new premium phone, you can probably settle for the non-5G model especially since not all countries have 5G networks.

The Samsung Galaxy Note 20 could use a metal frame but rumor has it a plastic back cover may be considered as well. The 6.7-inch Super AMOLED screen is also large enough but it will only have a 60 Hz refresh rate, 393 ppi, 20: 9 format, and a 2400 x 1080 pixel resolution. It is flatter this time so don’t expect curved edges.

The phone will come with an ultrasonic fingerprint reader, Exynos 990 processor, 8GB RAM, and a non-expandable 256 GB storage. We don’t see any 3.5 mm headphone jack so that may be gone. The imaging department consists of triple rear cameras: 64MP sensor with triple optical zoom + 12MP sensor with dual-pixel autofocus + 12MP with ultra-wide-angle f/2.2 aperture. The selfie camera is 10 megapixels with f/2.2 aperture and dual-pixel autofocus.

The Galaxy Note 20 comes with standard connectivity options: LTE-Advanced, WiFi 6, Bluetooth 5, optional 5G, dual GPS support, and USB 3.2 compatible USB Type-C. As with most premium Samsung smartphones, this one comes with AKG-tuned stereo speakers. Expect it to have an IP68 rating, dual SIM and eSIM support, and a 4300mAh battery. It will run on Android 10 with One UI and will be available in different colors—Mystic Green, Mystic Gray, and Mystic Bronze.