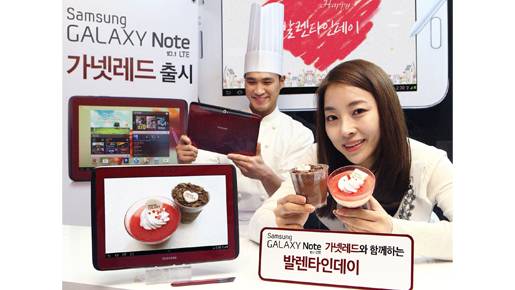 A short while back we saw Samsung announce the Galaxy Tab 2 7.0 in garnet red and as today, it looks like another Galaxy branded tablet is going red. The latest is the Galaxy Note 10.1 LTE and Samsung will have the red model available just in time for Valentine’s Day. The garnet red Galaxy Note 10.1 LTE will be available beginning on February 14. The one catch, as of now it has only been announced for one market.

You may have already guessed, but that one market is Korea. Aside from the new exterior coloring, the specs and features of the tablet remain the same. Basically, the Galaxy Note 10.1 LTE will still have the 10.1-inch 1280 x 800 display, quad-core 1.4GHz processor, 2GB of RAM, microSD card slot, 7000 mAh battery, 1.9 megapixel front-facing camera and 5 megapixel rear-facing camera.

Other goodies include LTE connectivity along with the S Pen, Wi-Fi 802.11 a/b/g/n, Bluetooth 4.0 and Jelly Bean. Aside from the announcement and soon-to-be release in Korea, Samsung has also said that this color will eventually roll-out globally. The one part they have yet to clarify, which additional markets would be getting the color.

Needless to say, we suspect Samsung will have this tablet on display during Mobile World Congress and may even have some additional release details to share when that time comes. Finally, those who may have been on the fence about a Galaxy Note 10.1 tablet purchase and were somehow convinced because of the garnet red color announcement, you may also want to check out our previous hands-on and review with the tablet.