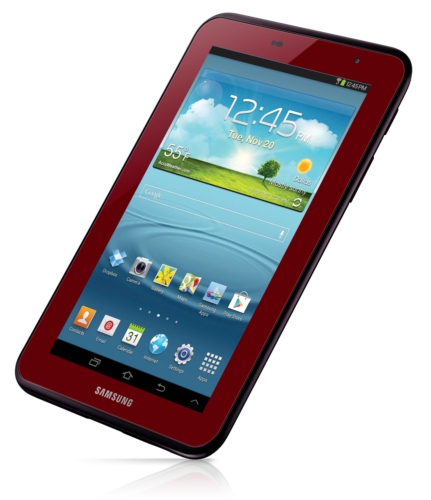 We saw the leak back in mid-December and as of today, Samsung has come forward with an official announcement for the Garnet Red Galaxy Tab 2. The one catch though, while the rumors were calling for a red 10.1-inch and 7.0-inch Galaxy Tab 2 — Samsung will only be releasing the smaller of the two in red.

Samsung is calling this one a “limited edition” model and will have it priced at $219.99. For the price you will get the tablet along with a matching Garnet Red case. Those interested in this new color Galaxy Tab 2 will be able to make a purchase at a variety of retailers including Amazon.com as well as Walmart, Office Depot, Toys ‘R Us and others.

Aside from the new color exterior, the tablet will be running Android 4.1 Jelly Bean along with hardware features to include a dual-core processor, 32GB of storage space, a microSD card slot, Wi-Fi, Bluetooth 3.0, USB 2.0 and an integrated IR blaster for home theater control. In addition to the IR blaster, the tablet will also ship with a pre-loaded Smart Remote app that will turn your tablet into a universal remote.