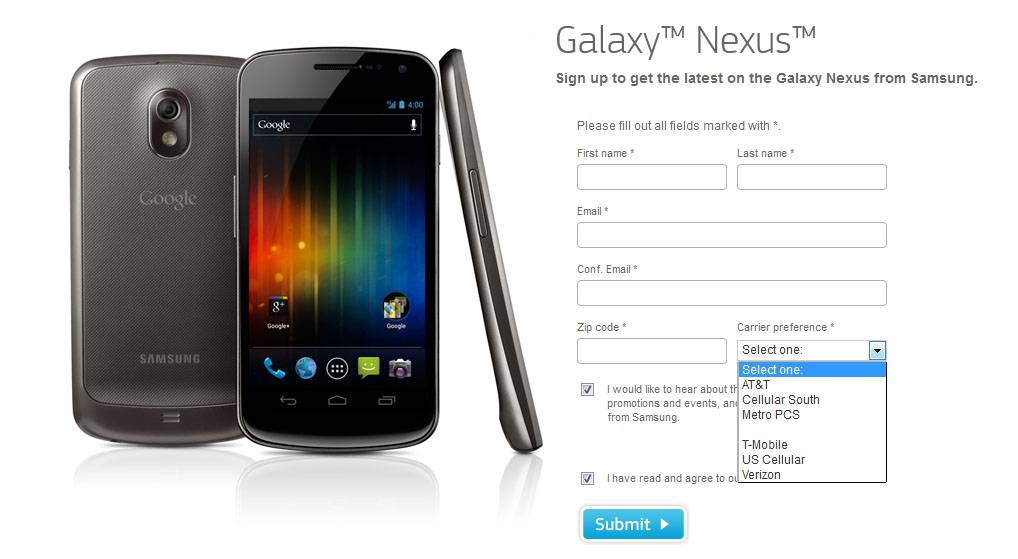 Good news for aspiring Galaxy Nexus owners: Samsung may intend to bring the phone to every single major American carrier, and at least three regional carriers as well. A new sign-up page has appeared at Samsung’s store, directing US customers to list a carrier preference. Seven carriers are listed, including Verizon, AT&T and T-Mobile.

We know that Verizon will be getting the Galaxy Nexus, and it’ll probably have some kind of limited exclusive in the U.S. market. The HSPA+ version (the same one that was displayed throughout Google’s Hong Kong event) has cleared the FCC using bands for AT&T and T-Mobile. The other four carriers listed on the website are probably up in the air at this point – there’s no hard evidence that Samsung is actually making devices for anyone besides Verizon, AT&T and T-Mobile, but if there’s enough consumer demand, they’d probably be open to the idea.

We still don’t have confirmation from Verizon that the Galaxy Nexus is coming at all (maybe they don’t want to steal the Motorola DROID RAZR‘s thunder?) but Samsung confirmed that Verizon would be the first to get it in the US. One of the official Google videos also showed off the Galaxy Nexus with Verizon branding, so you can expect the phone to land in Big Red’s stores sometime in November. Who knows how long it’ll be before other consumers can get a hold of it – if you’re on Cellular South, US Cellular or Metro PCS, it couldn’t hurt to head over to Samsung’s sign-up page and express your interest.