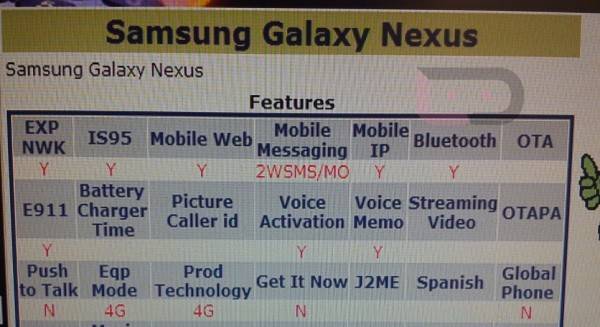 Not that you needed reminding, but the Samsung Galaxy Nexus is coming soon, and now Verizon’s internal device management software is offering a last bit of confirmation. The Galaxy Nexus (AKA the Nexus Prime) has been spotted in Verizon’s database, alongside the HTC Rezound (AKA the Vigor). No dates are available for either phone, but both have been confirmed as having Verizon 4G LTE radios.

The most interesting part about the Verizon database entry might be the name. We’ve been hearing rumors for months about Google’s Ice Cream Sandwich developer phone, and while “Nexus Prime” and “Galaxy Nexus” have both been bandied about, neither one seems to have completely overruled the other. With a probable announcement just days away in Hong Kong, Verizon may have inadvertently settled the argument: a Samsung UK executive said that the phone would be releasing “sooner than you think,” pointing to a launch within a few weeks after the announcement. Of course, that executive called the phone the Nexus Prime. Either way, we’re probably looking at a code name/retail name dichotomy here.

The HTC Rezound has been leaking out for a few months as well, and while it doesn’t have Ice Cream Sandwich, the hardware is still suitably drool-worthy. According to some candid shots, the Rezound/Vigor will feature a 720p display (though it’s almost certainly LCD, not Super AMOLED) and a screaming 1.5GHz dual-core processor. An 8-megapexel rear camera, 2 megapixel front camera and LTE radio round out the device.

With the Motorola DROID RAZR expected at almost the same time as the Galaxy Nexus, Verizon may have top-of-the-line phones releasing from Samsung, HTC and Motorola within weeks of each other. Fall 2011 is shaping up to be a banner season in the Android world.