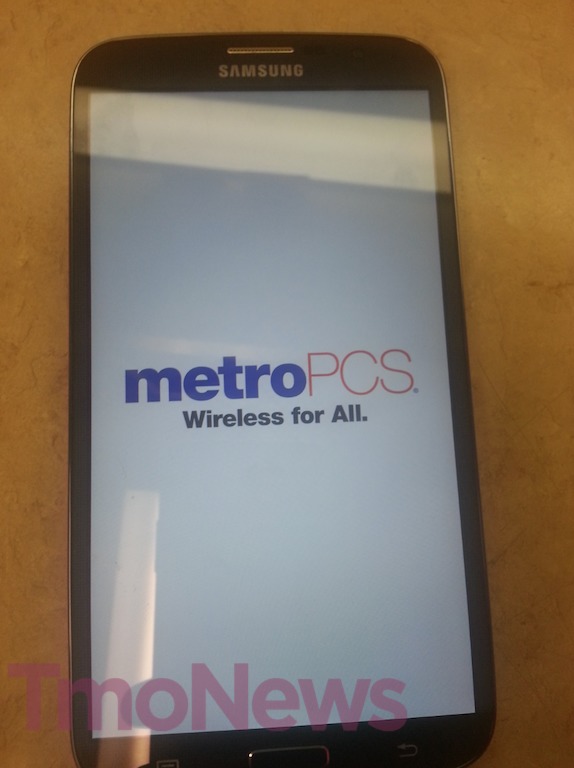 It has been some time since Samsung announced the Galaxy Mega 6.3. Since that point we have seen the handset arrive with several of the US carriers and it looks like another may be getting closer to releasing the oversized smartphone. The latest is MetroPCS and while we have yet to see any official announcement, an image has leaked showing a Metro-branded Galaxy Mega.

Or more specifically, an image of a Galaxy Mega showing a MetroPCS boot screen has surfaced. The interesting aspect here, despite the recent crossing over between T-Mobile and MetroPCS — it looks like this handset will be available only for those with the latter. Details coming from TmoNews state the Galaxy Mega will be SIM-locked to MetroPCS.

Specific release details have yet to be revealed. At this time word is that MetroPCS will be launching the Galaxy Mega sometime before this upcoming holiday shopping season. While we wait for the official word from MetroPCS, as this handset has already been announced by Samsung — we do have the specs.

The Galaxy Mega has a 6.3-inch Super Clear LCD at 1280 x 720 and is powered by a dual-core 1.7GHz processor with 1.5GB of RAM. Remaining specs for the handset include options for 8GB or 16GB of internal storage, a microSD card slot that supports cards up to 64GB in size, a 3200 mAh battery, 1.9 megapixel front-facing camera and 8 megapixel rear-facing camera. The handset will also be running Android 4.2 Jelly Bean.

Having said all that, while there will likely be some carrier specific software included on the MetroPCS version, we have reviewed the AT&T Galaxy Mega. Those looking for a bit more about the handset should check out that review, as well as our previous Galaxy Mega coverage in the Story Timeline below.