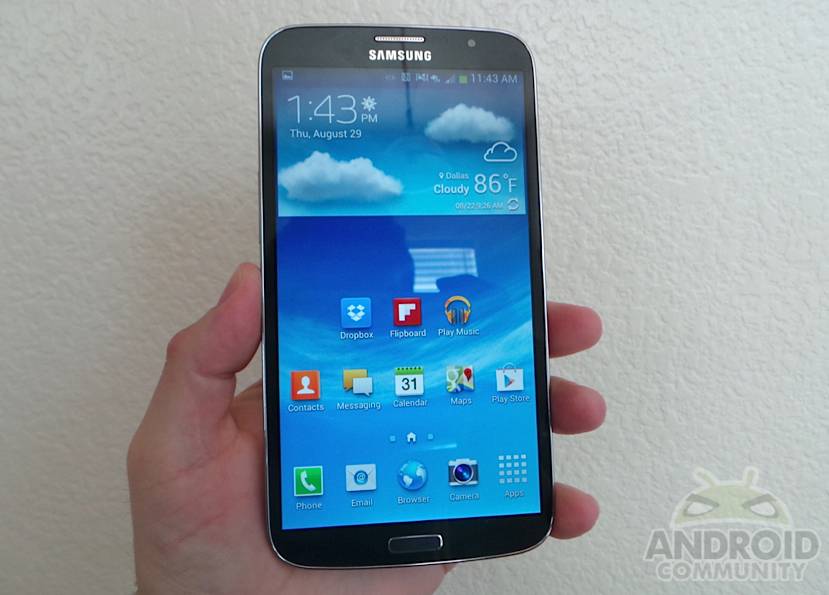 With a large 6.3-inch screen, the Samsung Galaxy MEGA smartphone sits right on the edge of ridiculous, but in a way it’s pretty awesome. Samsung’s known for launching smartphones with big screens, as they were one of the first to be successful in the “phablet” category with the Galaxy Note. This time around they’ve taken things up a notch and the 6.3-inch MEGA barely fits in my pants pocket. Read on to see our full thoughts on this mid-range smartphone on AT&T.

Yes we said mid-range. Samsung decided that not everyone wants a quad-core powerhouse smartphone like the Galaxy Note II with that WACOM display and a dedicated stylus. Some might just want a massive display, without all the bells and whistles. Well my friends, that is exactly what the Samsung Galaxy MEGA is. A watered down Note II without the stylus fun.

Samsung’s MEGA looks exactly like the Galaxy S4. It’s 100% the same, only much bigger, and not quite as powerful inside. The plastic front and back are met with the familiar small aluminum ring around the frame, and it’s basically a blown up Galaxy S4. The 6.3-inch display is only 1280 x 720p, so the text isn’t as crisp as we’d like. The Note II has the same resolution on a smaller 5.5-inch display, which looks much better. Overall 6.3-inches is just a bit too big unless you bump up the resolution. Here it’s noticeable.

For a full rundown we have a 6.3-inch 720p LCD display, Android 4.2.2 Jelly Bean, and some mid-range specs under the hood. It’s slightly above the Galaxy S III, so should still be plenty powerful. The device rocks a Qualcomm Snapdragon 400 dual-core at 1.7 GHz, and we have an odd 1.5 GB of RAM. 16GB of storage is inside, then the usual micro-SD slot is included. Thanks for that Samsung.

On the front is a 1.9 megapixel camera for video chatting, then the standard 8 megapixel camera is around back. It’s capable of the usual 1080p video capture, and it has many of the same features the new Galaxy S4 does. There’s a single LED flash, again in the exact same layout as the GS4. It’s the exact same design guys, nuff said. The same only bigger. The pictures above should tell you all you need to know.

As far as how we feel about the hardware. Well, it’s massive. This phone is a chore to use with one hand, even with many settings allowing apps to move to one side of the screen for “one-handed” use. It’s still tough. The hardware build quality is on par with other Samsung devices, so nothing special, but no complaints either. All around it feels nice. However, removing the back to swap an SD is a bit tough, as that back fully tears off and bends quite a bit. Since it’s so big and all. In the end we have no complaints about the hardware in terms of design or build quality.

The Samsung Galaxy MEGA runs the same Android 4.2.2 Jelly Bean build as the Galaxy S4, and is covered up in the usual TouchWiz tweaks. It looks, feels, and performs quite similar all around. We still have the smart pause and smart scroll eye-tracking features, Sound Shot, HDR and other camera software features are here, and of course no Samsung device would be complete without S-Voice, S Memo, S Translator, and a few other Samsung “bloatware” apps of features. 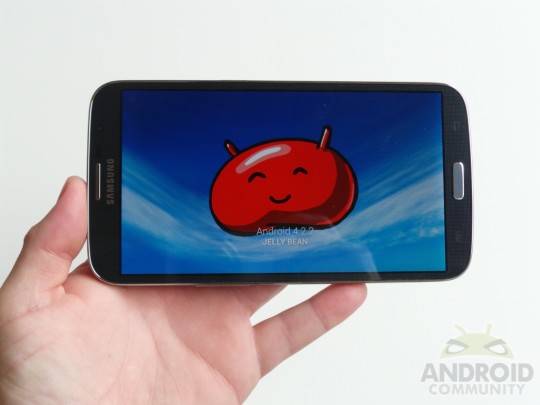 Aside from the Samsung and AT&T bloatware, this is a standard and enjoyable Galaxy device. The Airview gesture controls and previews are included. Where you don’t need to touch the screen to see previews of emails, calendar entries, or even an expanded view of pictures in the gallery. Hover a finger over it, and the MEGA does the rest. It’s a nice touch from Samsung, and they packed all of this into the MEGA. So we can’t complain.

Overall Android 4.2.2 Jelly Bean runs just as you’d expect here. Everything is smooth and fluid for daily tasks. However, just like we mentioned above this phone is just so damn big. I found myself getting irritated with not being able to reach things. Having to rotate it in my hand to reach certain areas on screen, and more. In an attempt to curb that Samsung will let you set “one-handed” operation settings for the keyboard, dialer, and a few other things. If this is needed, the phone is too big, but that’s just my opinion. Check it out below. 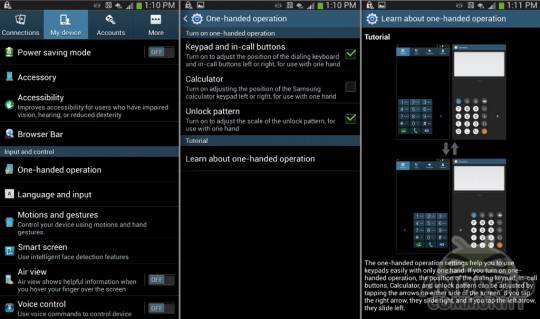 The same type of settings and “features” were included with the Note and Note II, so this is nothing new. But they could navigate with the stylus. Here you just have fingers and constantly feel like you need bigger hands. I’m not an NBA player, my hands are only pedestrian. We can’t knock Samsung for trying, and appreciate the inclusion of tweaks and settings to make the experience better for one handed use. Although I doubt anyone will be using this phone with one hand. You’ll feel like you’re about to drop it no matter what angle you’re holding it or sitting at.

The Snapdragon 400 dual-core runs at 1.7 GHz, and comes with an odd 1.5GB of RAM in this Galaxy MEGA. While that isn’t up to par with the quad-core powerhouse in other recent smartphones, it has plenty of juice. The MEGA and its large screen outperforms the Galaxy S3 from last year in most tests, but only by an inch. There’s plenty of power here, even if it isn’t quad-core. 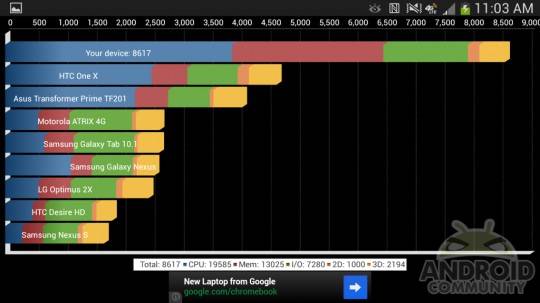 So of course we ran a few benchmarks just for good measure, as you can see above and below. Again, this is an area many hate, but others love. So we just present you our results and scores, and let you decide for yourself. I will say that the dual-core here is plenty fast and stable, and I’ve been playing Asphalt 8: Airborne all week on the Mega and it’s massive screen, and it handles those next-gen graphics with ease. You’ll have zero problems with performance on this phone. Case closed.

One thing many forget in reviews these days is general phone use. Since we have a huge 6.3-inch screen here I wanted to specifically mention this part. Holding this up to your face sure gets a few odd looks. An older lady asked me what I was holding on my face at Walmart yesterday. True story. I’d recommend getting a nice Bluetooth headset for use with it, but then you’re that guy, or girl. 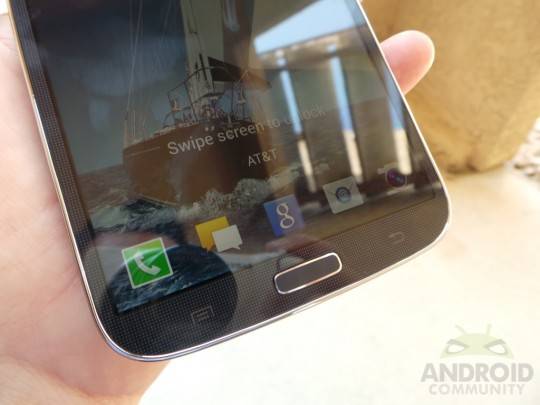 It’s an odd angle you’ll be holding to get the earpiece just right, since the phone is so big, but everything was loud and clear. The microphone down below is quite far away too, but again we had no issues with sound quality, nor did the other end.

As far as the camera goes. It’s safe to say the same aging sensor in the Galaxy S3 is inside the MEGA. We have an 8 megapixel camera that works quite well, and as we all know Samsung has some of the better camera in mobile. We snapped a few photos here and there, but just know this cameraphone will be one of the best available, give or take. Low light still isn’t great, but this is on par with almost everything else available. Here’s a few samples. 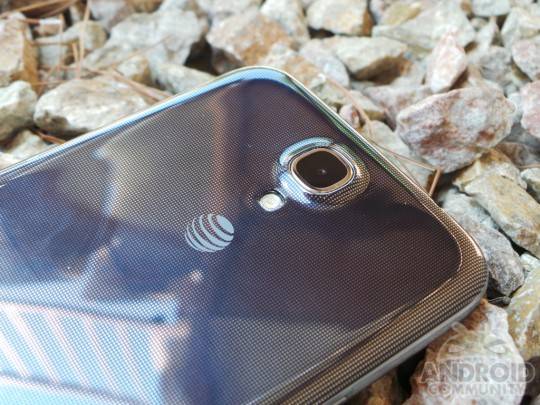 With a device this massive battery life is certainly going to be a question mark. This is really one of those areas that each individuals usage scenario will play a different role. Obviously, using that big bright 6.3-inch screen will drain the battery. However, casual usage you should easily last 24 hours on a single charge. 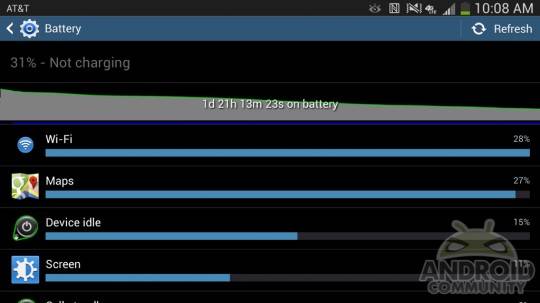 Here I used the phone occasionally, but not as much as the average person, and went from 78% to under 35% in about 25 hours, so with moderate to heavy usage at least 10-12 seems extremely reasonable. Playing Asphalt 8: Airborne and my battery dropped like a fly though, so again, it will vary from user to user. Luckily Samsung tossed a large 3,200 mAh battery under the hood, but looking at the pictures we feel a 3,500 or bigger would have been extremely easy to achieve. Why are manufacturers afraid to give us bigger battery options? 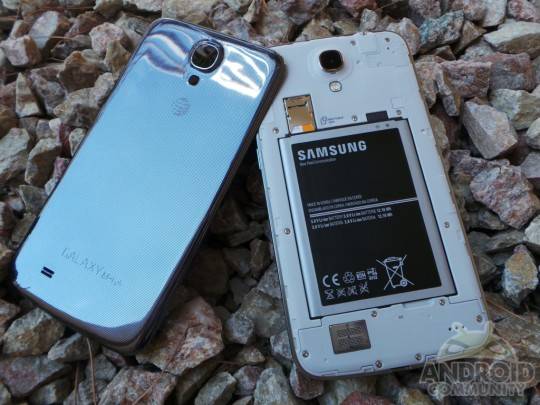 Sigh. This one is a rough one to try and call. For me, personally, the Samsung Galaxy MEGA isn’t a device I’d use daily. Nor would I recommend it based on the sheer size, especially with the Galaxy Note III just days away from being announced. However, the main purpose of this phone on AT&T is for those who want a huge screen, but are on a budget, or don’t need the fancy S-Pen. 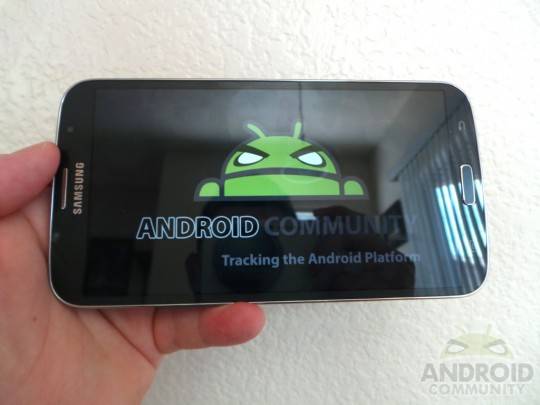 The Samsung Galaxy MEGA will run you half the price of a Galaxy Note II, yet the screen is almost an entire inch bigger. You have a powerful device here that is almost on-par with last years Note II, for half the price. It’s a pretty compelling deal for those big-screen enthusiasts. I’m just not one of them.

While we loved the hardware, software, and everything else we’re used to enjoying on a Samsung Galaxy device, the sheer size of this phone is just a turn off on too many levels. If you’ve got a thing for big phones, large hands, or don’t care if it fits in your pockets this is the device for you. We don’t like to say yay or nay on a device like this. Instead, head into your nearest local AT&T shop today (since it’s available now) and see if the size is right for you. That aside, this is a great device that will outlast that 2-year contract.