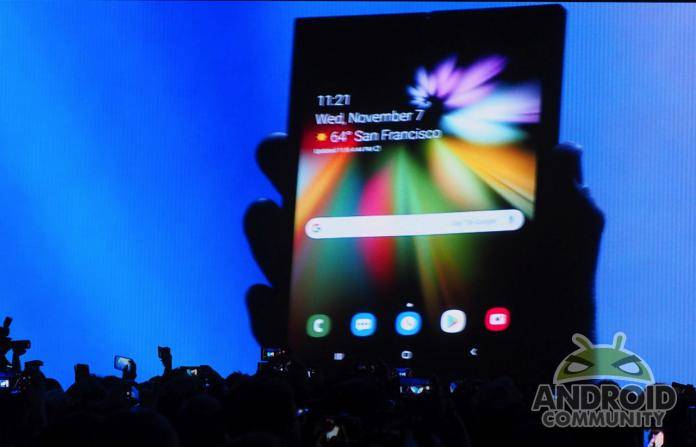 The Galaxy F foldable phone is something we know a lot of royal Samsung fans and industry-watchers are anticipating for. Aside from the Galaxy S10 with its possibility of five cameras, the foldable smartphone is now being prepped for release. There’s no more guessing if and when the South Korean tech giant will ever introduce such phone because we already had a glimpse of it during a presentation at the Samsung Developer Conference 2018 earlier this week. With the Samsung Infinity Flex Display, a foldable-flexible smartphone was showcased although we know it’s not the final design yet.

Details are scarce but definitely, the foldable phone will implement the Infinity Flex Design. We saw this over on Twitter:

Shara Tibken (@sharatibken) of CNET asked Samsung about the cost and availability. The reply: next year and an undecided pricing.

Q for @Samsung about foldable phone: what will it cost & when will it come out? Exec says: "It will be in the market when we’re ready, probably sometime in the next year. … Price wise, not yet decided. But will be set to be as appropriate as possible." #SDC18

So we’ll wait for more official information. 2019 is happening. The Samsung Galaxy foldable smartphone will be unveiled. We’re sure of that now…..unless Samsung cancels the plan. It has competition already so its foldable phone must be more advanced.