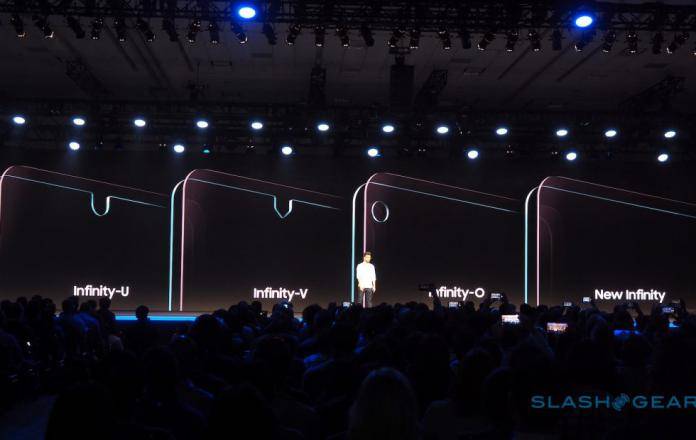 Samsung is one of the few smartphone holdouts when it comes to having notched displays that enables OEMs to have bigger screen real estate. They’ve even mocked some of their competitors for having it. However, at the recently concluded Samsung Developers Conference, the OEM did unveil some new Infinity Display panels and some of them actually have differently shaped notches.That’s no guarantee though that the notch will finally make an appearance in future phones as they also serve other customers that may eventually use these new displays.

Samsung Display previewed their new AMOLED line-up at the SDC 2018, giving several options to not just the Samsung mobile brand but to their other customers as well. There are actually four new screens that they unveiled alongside the much-awaited Infinity Flex Display folding panel. These are the New Infinity, Infinity-U, Infinity-V, and Infinity-O. The latter three are the ones with the notches.

The New Infinity looks similar to the current Infinity panel which we first found in the Galaxy S8 flagship series. Just like the previous ones, it tries to cover more of the front and has two curved edges that wraps around both sides of the phone, and having tiny bezels at the top and bottom. This time around, it pushes even closer to the upper and lower edges of the device.

The Infinity-U meanwhile has a central notch in the form of a U similar to what the Essential Phone is using now. The Infinity-V has more of an arrow-like or V-shaped notch so the display can push further to the top while still leaving room for sensors. Lastly, the Infinity-O has, obviously, an O-shaped notch but this time, it’s placed a bit to the side and is fully surrounded by AMOLED. They will be able to change the location of the cut out depending on the requirement.

What will probably happen is that the new Galaxy smartphones for next year will have the New Infinity display while the others will be marketed to their other OEM customers. But at this point, who knows, the Galaxy S10 may actually have a notched display. All will be clearer by 2019.