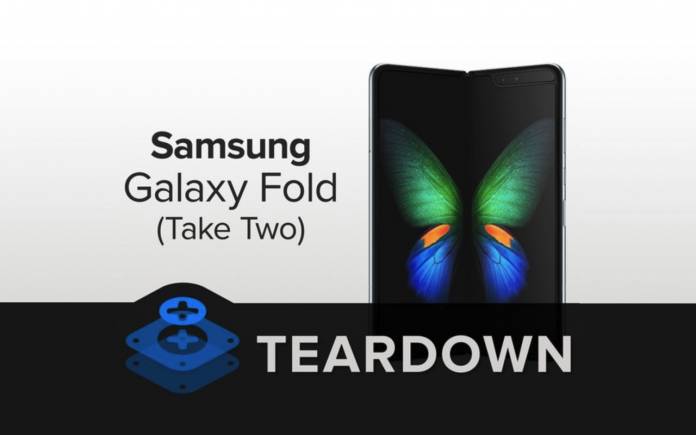 Now that the Samsung Galaxy Fold has rolled out for the second time, it only makes sense that we revisit everything that was mentioned and featured before. Last April, IFIXIT managed to do a teardown two after reports of displays breaking surfaced and even before market launch and employee training were canceled. The Samsung Galaxy Fold Teardown revealed the phone, or at least, the first version was fragile. As for the improved version, IFixit has conducted a similar teardown to check if the foldable phone is indeed better.

Did Samsung fix the Galaxy Fold? That’s IFIXIT’s major question. What changes did Samsung make from the previous version? There were several hardware revisions to improve durability but we have yet to try it for ourselves.

It was discovered Samsung added a protective cover the gap on the hinges of the frame. Before they were bare but you can now see there is a tape covering. This prevents grime and dirt to get inside the display.

The screen was also reinforced with an extra layer of metal. The polymer protective layer has been extended to the edges. It seems ready for longer use especially after watching that folding-unfolding durability test.

Repairability is still low on the meter. It’s 2 out of 10. It’s good that a single Phillips driver can take care of all the screws.

Many parts and components are modular but unfortunately, the mechanics within the “fold” appear to be complicated. They may also wear over time. The best way to fix damages would be the replace the display altogether.

Display or battery replacement sounds easy but it will be pricey. The front and back glass has been glued-down which meant bigger risk of the display breaking. That alone is an indication repair can be very challenging.