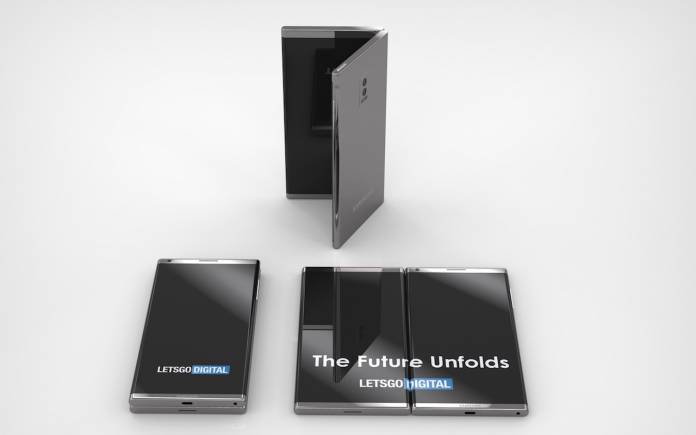 The Samsung foldable phone is going to challenge Huawei’s 5G foldable phone. You can say it the other way around–Huawei will challenge Samsung. Either way, we’re anticipating for the two foldable smartphones from the top two OEMs for several reasons. Samsung has been working on it the past few years while Huawei has been boasting its foldable phone will be ready ahead of Samsung. There’s also the idea that the phone will already include 5G connectivity. We’ve filled several pages about the Galaxy X and Galaxy Fold foldable phone but we’re hoping to finally get a hold of the device in the next few weeks or months.

The latest set of renders from LetsGoDigital shows us a sleek and smooth-looking folding phone. It folds outward like the iQOO foldable phone but with the hinge being so obvious.

There appear to be two separate screens separate in a reverse clamshell-like design. We know this isn’t final but it could be close to the one we saw on the promo video from Samsung Vietnam.

The two separate displays don’t quite prove the “flexible display” description. The flexible screen is what’s being leaked and rumored the past few years so we’re more than curious now as to what will the final look of the Samsung foldable phone will be.

If this rendered version is close to the real thing, then we’re certain it’s more like the ZTE Axon M with its dual-screen design. Let’s wait and see.