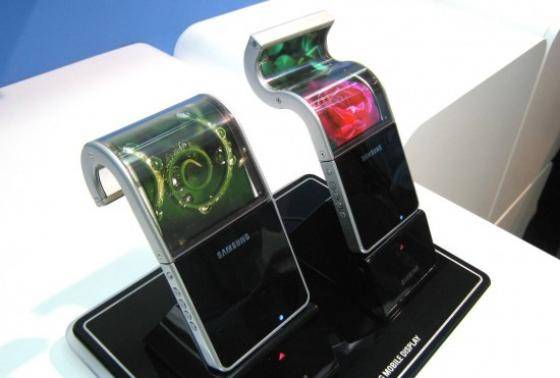 Remember the Galaxy S Skin flexible device we saw last year? Yup, just think of all the possibilities with this technology. Whether or not it would be practical on a daily use smartphone is still up in the air but we have a feeling Samsung has some unique and impressive devices up their sleeves. According to OLED-displays.net Samsung’s new flexible OLED’s are still on track for a late 2012 release date, and they’ve received “huge orders” from Youm, and plan to have tons of these displays hit the market later this year.

Samsung Electronics Chairman Kwon Oh-Hyun said today that the Korean company is getting “huge orders” from electronics makers for flexible AMOLED Displays by YOUM, and that they expect it to be ready for mass production in Q3 of this year. Oh-Hyun also mentioned the demand is significant, and they expect OLED’s to replace LCD by 2015.

Now we can’t get ahead of ourselves. We won’t be seeing smartphone like the picture above anytime soon, but Samsung could release watch displays, or tablets with limited flexibility at some point in the near future. With leading companies like Samsung, Apple, and others invested in this technology the options are basically limitless, they just need to create them. Durability may be an issue but I’d love to see some awesome products from Samsung this year, or in early 2013. What do you guys think?