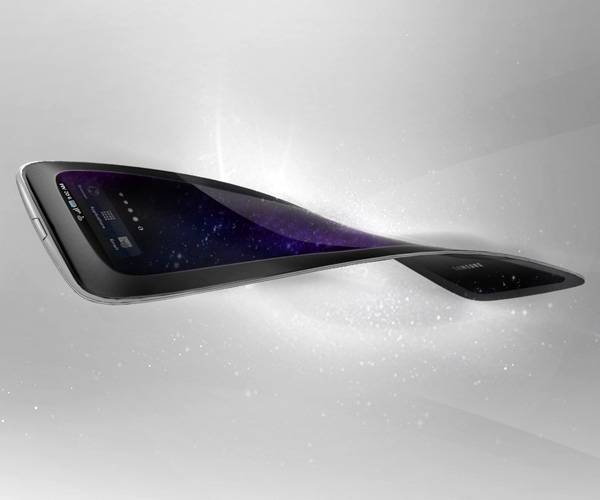 Before we go too far into this experiment in awesomeness, you should know that the following set of images are for a design experiment, a conceptual work made by an industrial designer wishing to explore the possibilities and current impossibilities of the way smartphones and their super amazing super AMOLED displays are able to work. This is of course therefor a Samsung Device, running with the Galaxy name, named here the Galaxy S Skin or just the Galaxy Skin, bending in all directions to give you an experience like none other.

The device you’re about to look at is said (again, in a conceptual universe) to be using a Graphene.SP AMOLED Natural User Interface. It’s essentially the same thickness as a few pieces of paper stacked up, and the entire device is surrounded by a Sensor Bar which somehow allows the device to have all the same communication functions as a normal smartphone would. The phone can be bent, folded, and set to stay in any position, be it set up like a folder, rolled over for a presentation, or flattened for your pocket. You can even roll it around your wrist as a watch.

Set it on your desk as a clock, plug in a microSD card to hold your 10,000 apps, or use it as a boom box. The very top and the very bottom of the device are made of a harder material (plastic or metal) in order to have the device sit strong not he desk for activities such as projecting a report on the wall (yes, it’s got a projector as well,) or watching a movie. What’s best about this device? It’s running a whole new version of Android called Android Flexy, made for running around corners and through this device in a manner never conceived before.