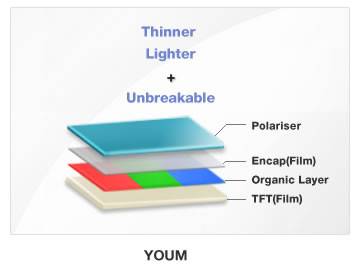 Those who don’t keep a religious watch on the comings and goings in the supply side of the technology industry will be surprised to know that Samsung, in addition to selling tens of millions of phones every year, supplies components like processors and screens to their own competitors. Just for example, the processor and the screen in the iPad come from Sammy. But when it comes to display tech, Samsung takes all comers, and one of the more interesting designs to come out of the South Korean company is their flexible Super AMOLED display. It seems they’re renamed the display tech to “YOUM”, for no discernible reason, as well as files trademarks for several more acronyms.

Flexible Super AMOLED, hereafter known as YOUM (as Samsung’s website seems to have confirmed the trademark name), consists of four layers of material: the AMOLED display cells are encased in two pieces of film, and a polariser (probably housing the multi-touch sensor) on top of it. There’s no glass in the design, which gives it a much greater flexibility than the barely curved screens seen on the later Nexus phones, though the concepts we’ve seen thus far are still in rigid cases for the most part.

Because of the lack of glass in the design, Samsung is referring to YOUM as “unbreakable”, though a more accurate term might be “uncrackable”. This is all still at the concept level as far as actual production goes – should Samsung or its manufacturing partners choose to implement YOUM in Android phones or any other consumer-grade electronics, it’ll still be at least a year before we see it in any devices. Still, this sort of flexibly display would allow for much more varied form factors – imagine a smartphone that can roll out its display to tablet size.