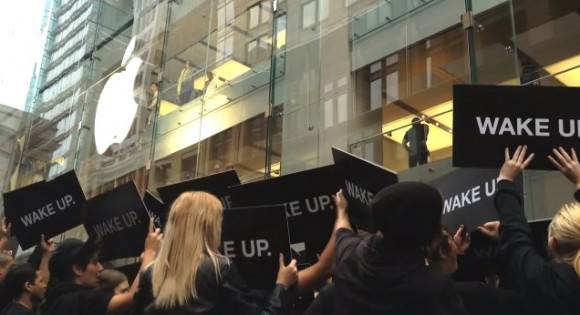 A video crashed the web yesterday with what people were calling a Samsung anti-Apple flashmob campaign that was staged outside of a large Apple store in Australia. I’m sure you saw the news and if not you’ll want to see video below. In a turn of events Samsung has came out this afternoon and directly denied any involvement in the situation — Samsung Australia at least.

After our sister site SlashGear reached out to Samsung they received a quick and short answer from them that was direct and right to the point. Here’s what they had to say:

This situation instantly had people taking to Twitter saying nothing but negative things about Samsung. Calling them “childish” and “out of line”. The previous videos calling iPhone buyers iSheep while promoting the Galaxy S III were one thing, but this was taking it too far. Or was it? When the flashmob of dozens of black-clad men and women holding “Wake Up” signs begin chanting outside of the Apple store I instantly was extremely surprised anyone from Samsung would sign off on this, and apparently they didn’t.

For now, it’s unclear who planned or arranged the anti-Apple flashmob, or if we’ll ever find out. The man behind the video, Blunty3000 was in the right place at the right time, or maybe he knows more than he’s telling. What do you guys, the readers think of the video below? Was this just one of many attacks as of late and not a big deal? Or was this taking things too far?