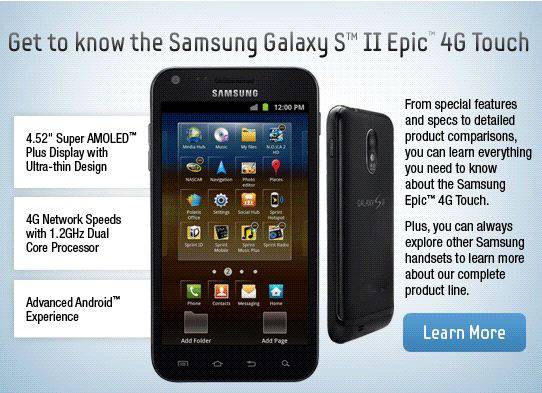 Well guys it appears this is a bit more official after this. Samsung has confirmed the Galaxy S II with 4G WiMAX and it will be called the Samsung Galaxy S II Epic 4G Touch on their online training site. I must say that is a HUGE name for a smartphone and it really is just way too long. I’ll be calling it the SGSIIE4GT for short, if you call that short.

We have heard rumors of an upgraded version of the Galaxy S II more than a few times, and expect to see it at IFA here shortly since we will be there live. These new images confirm a few of the recent rumors just as we reported yesterday that the US models would be coming to market with large 4.5″ displays rather than 4.3″ like the current Galaxy S II. Looking at the image above we can now confirm they will in fact have a 4.52″ AMOLED display but resolution is still unknown.

We have also heard of upgraded processors sporting a 1.4 or 1.5 Ghz speed but clearly stated the WiMAX version leaked above will be powered by the same 1.2 Ghz dual-core as previous models. Maybe that 1.5 Ghz speed bump is being saved for the Samsung Nexus Prime. Today in just a few short hours is the Samsung Galaxy S II U.S. Launch event in NYC and we have one of our own there to get all the details live so stay tuned as everything else unwraps today.