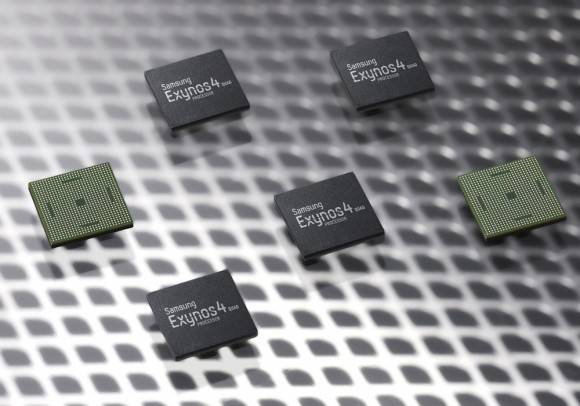 NVIDIA unveiled the Tegra 4 processor earlier in the week and now we have some big processor news coming from Samsung. Simply put, they have officially announced the Exynos 5 Octa chip. Samsung has said that this chip is the world’s first mobile application processor to implement the ARM big.LITTLE processing technology from the Cortex A15 processor.

Perhaps more exciting sounding, the Exynos 5 Octa chip (as implied by the name) will consist of a total of eight cores. This will be broken down as four Cortex-A15 processors and four Cortex-A7 cores. Samsung has said that this will allow for the A15 processors to handle processing-intense tasks with the A7 cores handling the lighter workloads. In other words, Samsung is looking towards efficiency.

In fact, Samsung has stated that this Exynos 5 Octa chip will be up to 70 percent higher energy efficiency as compared to the previous quad-core Exynos. Not to mention, that the Exynos 5 Octa will be able to handle multiple applications as well as multiple tabs and even HD video without issue.

The chip will also support 3D, which could mean good things 3D gaming related may be coming in the future. Samsung demonstrated the processing power with round of Need for Speed Most Wanted. Of course, that is similar to how we saw NVIDIA show off the Tegra 4 with a round of Dead Trigger 2. That all being said, at this point we are not expecting to find the Exynos 5 Octa in anything but high-end devices and even then, it may be a little while before it arrives in a handset near you.