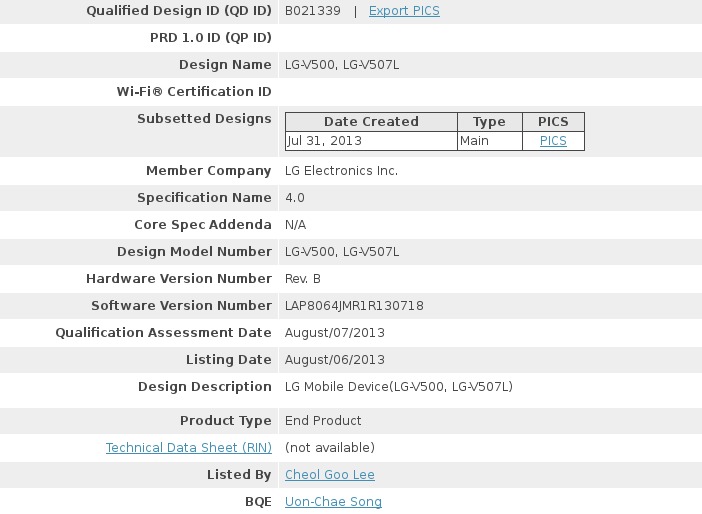 The LG G2 is barely out the door and yet there’s already talk of LG’s next big product. If this filing for certification with the Bluetooth SIG, we might be seeing a new tablet from the manufacturer really soon.

LG has released Android tablets in the past, but neither the Optimus Pad nor the G-Slate have met wild success compared to the tablets from rival companies. The company seems to have switched it gears to focus primarily on smartphones, with the G2 being their latest and greatest flagship. But it seems that LG hasn’t completely given up on tablets, with rumors coming up as early as May of a new Android tablet in the works.

The Bluetooth certification filing could be interpreted that indeed LG is on its way to unveiling the rumored device. There is mention of two model numbers, the LG-V500 and the LG-V507L, which could indicate two separate models, a WiFi version and a 4G LTE version, a common practice in tablet designs. The filing also makes mention of a software number that has “AP8064” in it, which could be referring to Qualcomm’s quad-core Snapdragon S4 Pro chip which has the same model number.

Everything is still purely speculation, but earlier rumors have hinted that LG plans to unveil a new tablet in the third quarter this year so we could be getting confirmation or new leaks soon. It wouldn’t be a surprise if it does so during the IFA trade show in Germany on the first week of September.