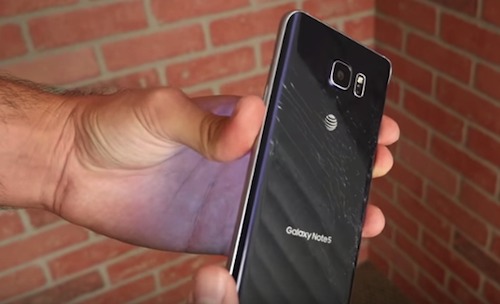 I just love it when other geeks come to Reddit to show off what they have and share what they know. We’ve learned a number of new things about a certain topic or issue and we’re happy that the site has become a nice place for discussion. Redditor joelrtaveras just shared that he was able to get a hold of the Galaxy Note 5 and the Galaxy S6 Edge Plus–two of the highly anticipated mobile devices from Samsung.

The upcoming Samsung devices was brought to the redditor’s retail location and he was able to hold them. He said the Galaxy Note 5’s shape felt good in one hand especially because of the tapered back design. The Super AMOLED display screens of the two looked great. The Galaxy S6 Edge +’s curved screen looked also impressive.

We’ve been hoping for a microSD card slot but sadly, there won’t be anything on either of the two so yeah, that means no storage expansion. Even that rumor about the 32GB base model being doubled looks like it won’t happen. As for the Galaxy S6 Edge+, the phablet will also have special apps similar to the Note Edge.

The Galaxy Note 5 is said to be thicker than the iPhone 6 Plus. However, it’s a bit narrower and shorter. The home button can control the camera when you double click on it. And the auto eject S Pen we’ve been talking about, the new Note 5 S-Pen will have a push to pop mechanism.

The two smartphones are huge with great cameras but the redditor who got to hold them said he prefers the Note 5 because of how it felt in one hand. I guess that one is more compact despite the big size compared to the Galaxy S6 Edge Plus. No mention about the battery because according to joelrtaveras, the back was non-removable.

It’s less than two weeks before the August 13 launch so be patient. We’ll know the truth by then.