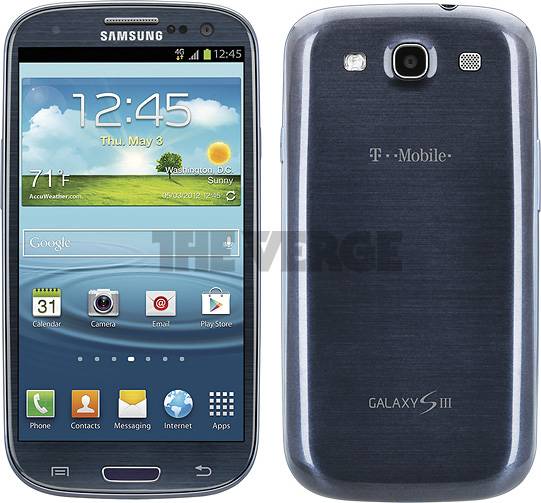 Stop the presses! Photos of T-Mobile’s Galaxy S III have leaked! And… they look just like the international version. How exciting. Believe it or not, there’s some pretty relevant information to be gathered here: Samsung appears to be sticking with the physical centered home button flanked by two capacitive buttons, unlike previous US Galaxy phones that used the standard four-button Android arrangement. We can’t confirm that these photos are real, but the cases at least seem to be taken from photos that are distinct from the official international press stills.

Though Samsung isn’t overly fond of the implication, many have said that the lack of bi-lateral symmetry indicates a direct attempt to forestall Apple’s lawyers. It’s long been assumed that the lack of a physical, centered home button on the Galaxy S and Galaxy S II (in the United State,s at least) was for similar reasons. Perhaps the new wedged shape of the Galaxy S III’s home button is enough for Samsung to feel a little more confident in this area.

Both white and “pebble blue” devices are shown, though there may be issues with the latter. Like every other American cellular provider, T-Mobile has yet to confirm that it will carry the Galaxy S III, despite numerous leaks. We’re still wondering if the T-Mobile version uses a Snapdragon S4 dual-core processor like Verizon and AT&T’s leaked versions, or if T-Mobile’s current lack of LTE will allow them top opt for Samsung’s newer Exynos 4 quad-core processor. The last we heard, T-Mobile was aiming for a June 20th release.