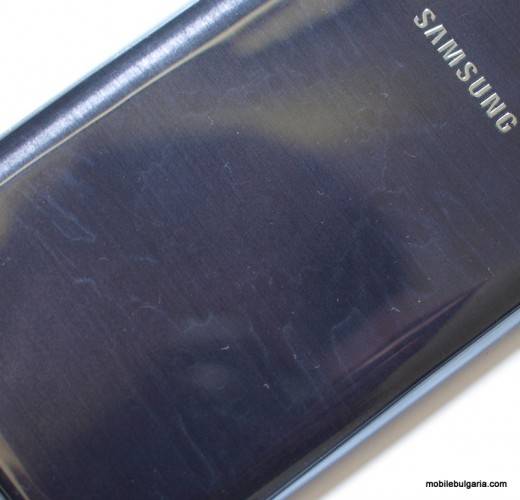 Samsung has confirmed their Pebble Blue Galaxy S III has been delayed with comments earlier today, basically stating that their high standards weren’t met with the blue models, thus resulting in small delays and new versions being manufactured. Samsung hasn’t mentioned any specific reason for the delay of their “newly invented” Pebble Blue color but it appears that we now know why.

Samsung’s new “special hyper-glaze material” coating they finish the devices with that gives the Galaxy S III a premium ceramic feeling, while also protecting the device from scratches and damage appears to be the problem. SlashGear received the details from the folks at Mobile Bulgaria who got the blue model and the image above is the results. The special glaze finish didn’t dry properly and as a result you get this “milky” and dirty looking finish that can’t be wiped or washed away. It’s almost like paint that didn’t dry properly, or too much was applied causing the milky result shown above.

This leads us to believe the Pearl White model could very well have the same effects, only they aren’t visible on that finish. Samsung only mentioned the blue model but Vodafone UK told Android Community yesterday that the 32GB white models have also been delayed, but not the 16GB version. Samsung has been rather quiet regarding the delays other than the comment mentioned earlier today, we’ve reached out for additional details and hopefully come clarification on the image provided. Here’s what Samsung’s had to say so far:

Samsung is working hard to ensure that customers will get the Pebble Blue coloured devices as soon as possible.”

For more details on the impressive smartphone check out this Galaxy S III review! Stay tuned as we wait for additional details from Samsung.