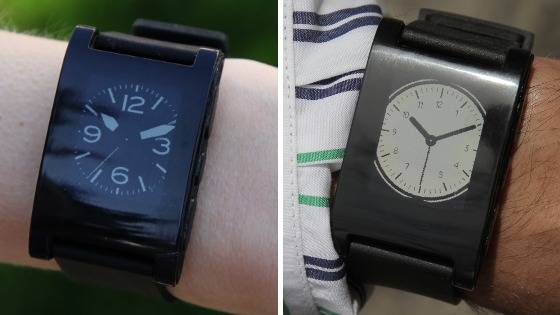 Smart watches are finally starting to catch on, but unfortunately, they’re all pretty expensive – not to mention bulky. One Kickstarter project aims to change that with a lowered featureset and Kindle-style e-ink technology, bringing both the size and the price down to something a little more manageable. The Pebble watch is currently in the concept stage, but with a Kickstarter campaign that’s nearing completion, it looks like it’l be hitting stores before the end of the year.

There’s nothing ground-breaking about the Pebble watch – it’s actually a little less complex than would-be competitors like the WIMM One and the I’m Watch. But it’s small, stylish (or at least more stylish than alternatives) and its e-ink display should solve the ever-present problem of battery life (7 days). A Bluetooth connection pairs it with Android or iOS for alerts, including caller ID, email and Gmail, calendar events, Facebook and Twitter messages and weather. Text message alerts are exclusive to Android. There will also be an SDK for pairing with other apps or taking advantage of the watch’s accellerometer and vibration motor, and watch faces and watch-specific apps can be distributed through a separate app store. And for you dedicated watch wearers out there, the Pebble works with interchangeable 22mm watch bands.

The campaign has reached over 80% of its $100,000 goal with 37 days remaining, virtually guaranteeing success at this point. It easy to see why: for a $100 commitment you get the Pebble watch when it releases, at a projected retail price of $150. Increased pledges get access to increased rewards, including color choice,s early access to the SDK and more. I’ve already put in my pledge. The campaign is hoping to deliver final hardware by September of this year.