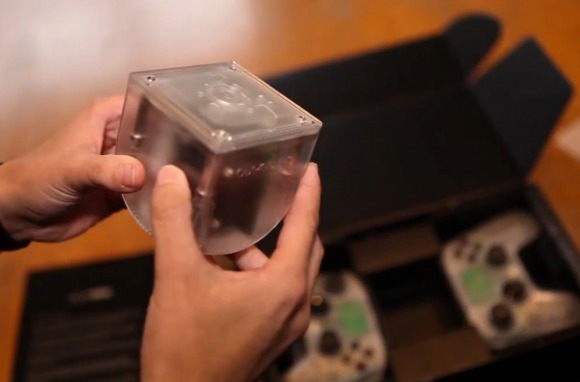 While we wait for developers to begin to receive those consoles — it looks like the team behind the OUYA has taken to YouTube with an unboxing video that details exactly what developers can expect. And coming as a nice surprise, 1,200 developers will be getting a special edition translucent version of the Dev Console.

You can check out the unboxing video for yourself, however those looking for some of the basics such as what is included in the box — you can expect the special edition console and two matching translucent controllers as well as batteries (for the controller), an HDMI cable, micro-USB cable, power adapter and welcome letter. The letter will serve as both a thank you and a reminder that this is an early release and things may not be 100 percent. Perhaps more important though, the letter also points out that this console is for development and currently has no games installed.

Speaking of games though, we learned about 10 upcoming games earlier in the month. The games were coming from 10 different developers and include the following; Fist of Awesome, MechKnight Chronicles, Syder Arcade, KidElectro, Space Runner, Legend of Dungeon, iMechOnline, DustyRevenge, HolyShield! and Starbound. That all being said, even if you are not a developer and not going to be getting one of these special edition consoles, the video is still worth a watch.