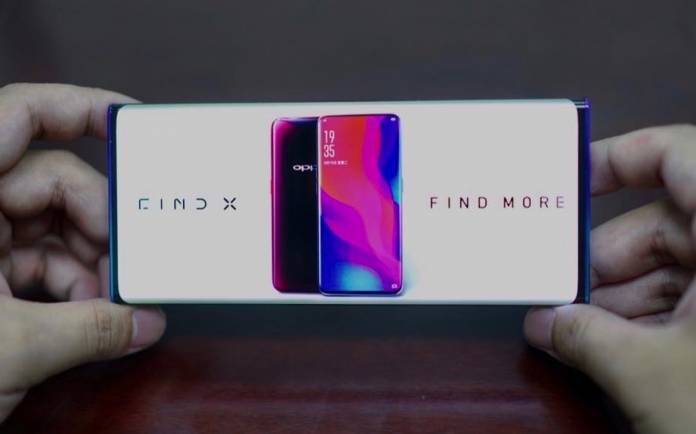 After the OPPO Reno, the Chinese OEM has yet to introduce something new although we’ve heard a few new things from the brand. Like Vivo, it’s been working on the Dual WiFi feature. There’s also the OPPO Under-Screen Camera and MeshTalk recently unveiled at MWC Shanghai. We’ve also mentioned the OPPO Realme sub-brand launching a 64MP camera phone soon, as well as, that OPPO foldable phone concept. A new phone has surfaced on Weibo, showing off what is said to be a waterfall display.

An OPPO executive teased the phone with a “waterfall” display. It’s not waterdrop but waterfall which is simply a curved edge screen that appears to be almost bezel-less. This is actually nothing new to both Vivo and Oppo because the two have been launching phones with a notch-less, all-screen display.

What we see in the images is better with some 88-degree fold on both sides. The bezels aren’t obvious from the front because of the “curve”. The phone is only a prototype but we have no doubts it can turn into reality.

OPPO already has Find X so this could be a newer version. If you may remember, the OPPO Find X was released in June 2018. It took smartphone technology right to the edge. The front is bezel-less because of the selfie camera but for this device, we’re assuming the under-display camera will be implemented. The phone needs a follow-up and this mysterious phone could be it.

No other information has been provided. There was no mention of launch, release date, pricing, and specs. The phone could also be similar to the Vivo NEX 3 because that’s the norm between the two brands. It’s only a matter of time before OPPO or Vivo makes an important announcement about a phone with an under-screen camera and probably Dual WiFi.