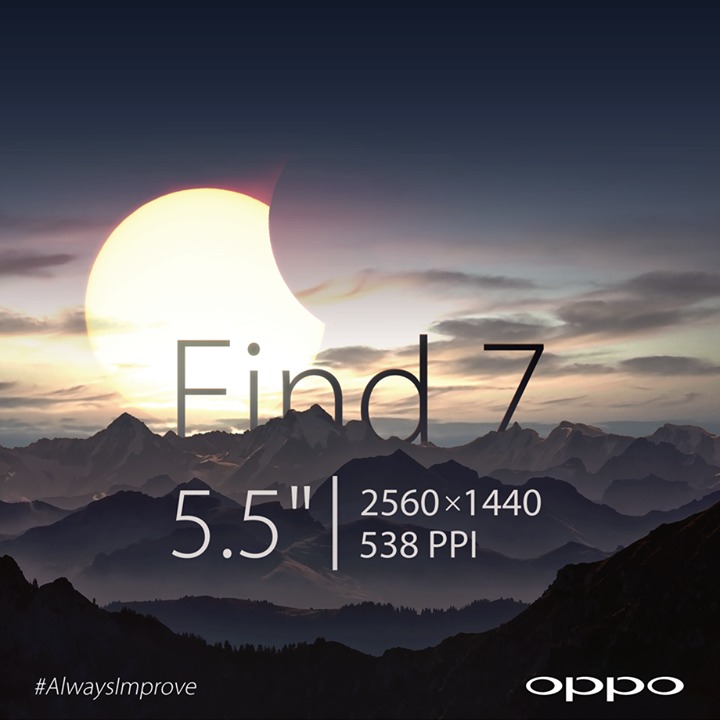 OPPO hasn’t said much about when we can expect the Find 7 to get a full unveil and release, however they have recently begun teasing the handset. This teasing comes as part of the #AlwaysImprove campaign which appears to be slowly revealing the specifics for the handset. Things began with learning what the display wasn’t and now we know what it is — in terms of size, resolution and PPI.

The details were shared, in image form, and show the Find 7 will have a 5.5-inch display. Those further details show the display will have a resolution of 2560 x 1440 and a PPI of 538. This appears to have the OPPO Find 7 shaping up to be a spec-rich device, but alas, this is just one of the many factors we need to learn.

So far OPPO hasn’t suggested what detail they are going to reveal next. For now we will have to keep an eye on their social channels. And in the meantime, we did see the CM Edition OPPO N1 come available for purchase on Christmas Eve. That handset is selling for $599 (16GB). The CM Edition OPPO N1 is the first handset to come pre-loaded with CyanogenMod and also brings a few extras such as a case and stickers.