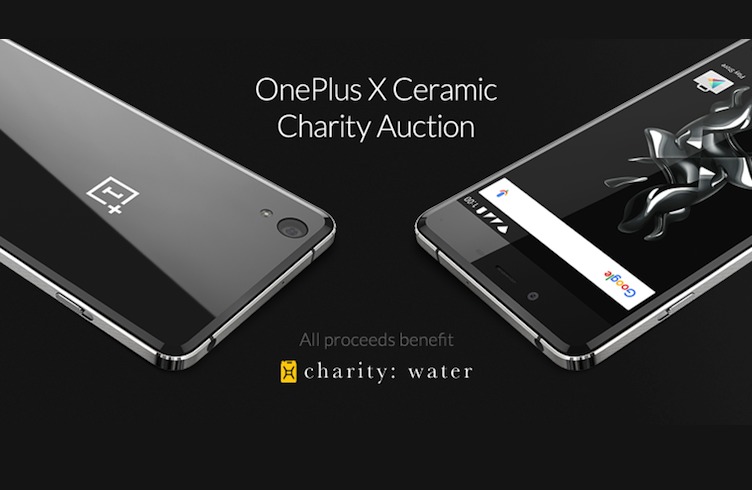 Chinese OEM OnePlus is set to celebrate its second birthday. It’s been two years since an unknown startup announced the OnePlus One smartphone that intrigued the whole Android community because of its invite-only system. There’s that certain air of exclusivity but we’re not sure how many units the company has actually sold. It has since launched two more models: the OnePlus 2 and the OnePlus X, both still needing special invitations to purchase.

For its second anniversary, OnePlus is giving back by giving all proceeds of sales to a charity. OnePlus will be selling five units of limited-edition OnePlus X Ceramic version at the eBay Giving Works auction. Not just a portion of the sales will be donated but everything. For this year, OnePlus chose ‘Charity: Water’ as the lucky recipient.

Charity: Water is a non-profit organization that aims to bring safe and clean water to more than 663 million people all over the world. The group works to deliver practical and tangible solutions to people by building wells, filters, and rainwatchers among others, and advancing health education. Its founder Scott Harrison is happy about this partnership with OnePlus. He sad, “It’s great to see companies like OnePlus not only focus on building a premier product for their customers, but also make giving a part of their model. We’re really excited to join forces with them to bring clean water to people in need around the world.”

OnePlus X Ceramic phones are now listed on eBay. You can now start bidding for one ‘Limited Edition OnePlus X Ceramic Auction for charity: water’. Phone uses Zirconia ceramic which is actually hard to produce. OnePlus is making only 10,000 units of the new OnePlus X Ceramic. If you win the auction, you will receive the phone plus one physical OnePlus X Ceramic invitation to share with anyone.

Bidding will start at $0.99 and will last for five days. This highest bidder will obviously win and be able to help charity: water. As of this writing, the lowest bid for one unit is now at $700 while the highest for another is $835. Not bad for a smartphone that’s originally $250. Now that’s another cool shopping experience for a good cause. Who wants one?