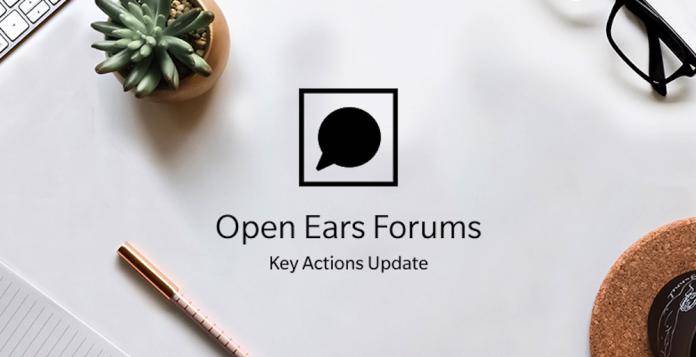 Even when it comes to updating the customers, OnePlus never settles as it is reporting updates on actions made during the first half of 2018. We’re already now in H2 which means the possible arrival of the OnePlus 6T or some other color variants apart from the OnePlus 6 Red and the OnePlus 6 Avengers Infinity War Edition may be unveiled. So far, so good. The Chinese OEM has sold out over 22 million units in about a month but again, it never settles.

Open Ears Forums has been a helpful channel between the phone maker and the customers from around the globe. It is where news and special announcements are published first before those press releases make their rounds. The company sees to it they listen to feedback and suggestions from the consumers–the people who really use the products. Brand improvement is crucial and we can say OnePlus has matured over the past four years.

OnePlus takes pride in advancements of the camera, customer service, and the OxygenOS platform. We may have missed a few updates but we’re certain we’ve covered the major ones.

The ‘Open Ears Forum: OxygenOS’ held in San Francisco, California raised a number of questions. The team worked to ensure they’re answered or solved. The most recent update was the OnePlus Software Maintenance Schedule announced last month. The official Android 8.1 update for OnePlus 5 and 5T is ready after the success of the last OxygenOS Open Beta builds. Before year-end, OnePlus will add support for Ring, Vibrate and Silent mode in Alert Slider.

Accent color customization support has been ready for the OnePlus 5 and 5T and will soon roll out for the new OnePlus 6 and the older OnePlus 3/3T and the OnePlus 5/5T. The said models will also receive support for Camera2 API. This means full support plus fixes on compatibility issues. Another update coming in the near future is the ability to use specific SIM to call out for a different user group.

When it comes to customer service, the company held an Open Ears Forum last March 24 in Stockholm, Sweden. It was the second effort that yielded important updates including improved remote session process, agent response, community page, and better estimates for repair costs on the support page. Turn-around time for repair has been reduced by about 30% in Europe and 50% in North America. In the coming months, expect a special app to be introduced that will help in diagnostics and troubleshooting.

When it comes to imaging, an ‘Open Ears Forum: Camera’ was held in Hamburg, Germany last March 3. OnePlus rolled out a fix for all those compatibility issues with 3rd party camera apps. HDR settings are now kept from the last time app was used while editing experience in the Gallery has been optimized together with the editing experience in Gallery. The OnePlus comes with an “oil painting effect” and the company has just rolled out some optimizations.