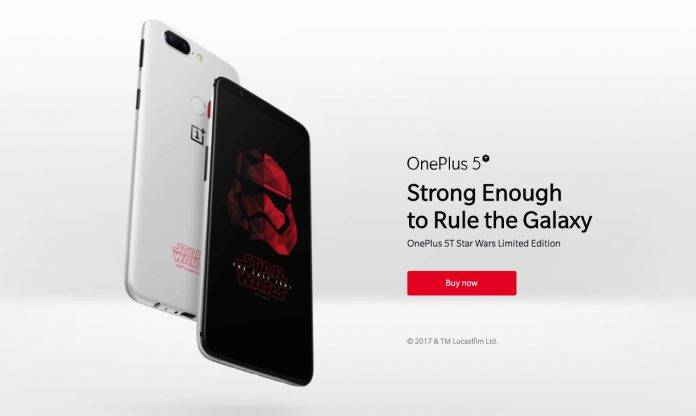 The last Star Wars movie is now showing in most theaters around the world. Fans are still denying the possibility it’s the last but we’d like to think it is. Perhaps a new generation will rise. We haven’t seen it yet (maybe this weekend) but for now, we’re trying to decide if we want this Star Wars version of the new OnePlus 5T.

The Limited Edition Star Wars OnePlus 5T is now available in India. If you’re a true blue Star Wars geek, we know you’d want this. The Star Wars name plus the fast performance of the phone are enough to make you want it. The phone is also coming to Europ.

Nothing has changed in the specs. The OnePlus 5T Star Wars Limited Edition is the same as the standard version. There’s the 6.01-inch AMOLED screen, Snapdragon 835 processor, 64GB built-in storage, 6GB RAM, 16MP and 20MP dual camera setup, and a 3300mAh battery.

Some Star Wars wallpapers are also now available for download for the OnePlus 5T. Even if you don’t have a OnePlus phone, feel free to get them and set as wallpaper on your device.