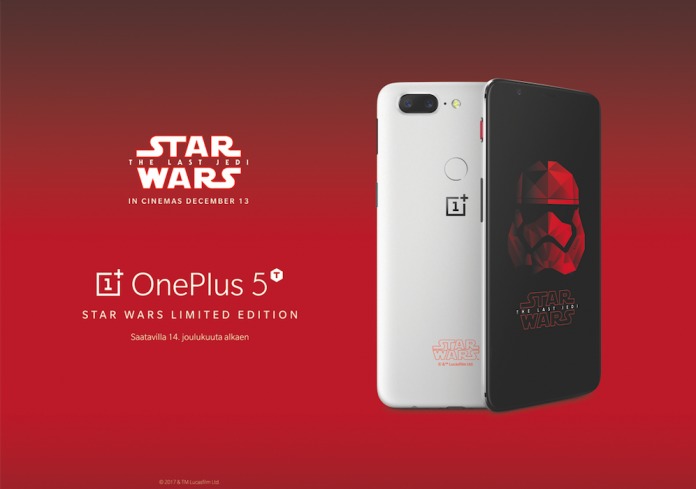 When OnePlus announced that they were releasing their special 5T Star Wars limited edition, but only in India, they broke the hearts of fans who live elsewhere. But it looks like those who are in Europe, at least in the Scandinavian region will also be getting the special smartphone also by next week. In an official blog post, the Chinese OEM announced that it will also be available in Denmark, Finland, and Sweden by next week just in time for the premiere of Star Wars Episode VIII: The Last Jedi.

This limited edition variant has an all-white back and a black front, with red highlights in its alert slider. At the back, you’ll find the Star Wars official logo in red ink, so it looks pretty and classic. Other than that, it’s the same OnePlus 5T device with its 6.01 inch AMOLED screen with a Snapdragon 835 processor, 6GB RAM, 64GB internal storage, dual cam with 16MP + 20MP, and a 3300mAh battery.

Early birds who live in Denmark, Finland, and Sweden can get the Star Wars phone at the premiere of The Last Jedi in the Tennis Palace in Finland on December 13. Then the very next day, it will already be available in Elisa Stores or on the OnePlus website. The price of the device hasn’t been announced yet even in India, so we don’t know yet if it’s the same price as the original 5T or something much more expensive (probably the latter).

There’s also no announcement yet if it will be available elsewhere, but given that we initially thought it was for India only, there’s a huge possibility we might be seeing the Star Wars edition in other regions as well.