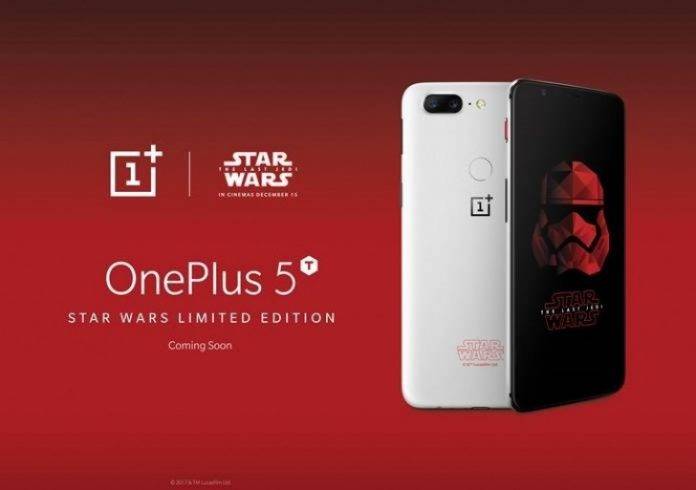 The rumors which we first heard a couple of weeks ago were true: OnePlus was indeed coming out with a special Star Wars themed variant of their smartphone. However, it looks like the OnePlus 5T Star Wars Limited Edition will only be available in India for now. The leak also got a few of the minor details wrong, but they’re pretty insignificant as long as you want anything related to that universe and that you live in the South Asian country.

Initial reports were saying this variant of the OnePlus 5T would be red, to match the color scheme of the Star Wars: The Last Jedi promotional materials. But the variant actually has an all-white back but with a touch of red as the Star Wars logo is found at the bottom. The front of the device as well as the buttons on the side are all black. The only thing red there would be the alert slider and it’s a bright red if that matters.

Other than the physical, there were no other details provided as to what makes this a special Star Wars Limited Edition device. We assume that all specs of the OnePlus 5T will also be present here, including a 6.01 inch AMOLED screen with a Snapdragon 835 processor, 6GB RAM, 64GB internal storage (or maybe the 8GB RAM, 128GB storage variant), dual cam with 16MP + 20MP, and a 3300mAh battery.

We’ll find out more details over the next few days. But the OnePlus 5T Star Wars Limited Edition will be available in India starting December 15. No news if it will also be available in other countries.

[UPDATE] Well, it’s now official official: The OnePlus 5T Star Wars Limited Edition will be available on December 14, a day before the official opening of Episode VIII and there will be a special launch event in Mumbai with a pop-up store and a “surprise” which of course no one has any idea yet. Star Wars fans (and those wanting a new OnePlus) will be able to purchase tickets by December 7 and it will cost them 999 rupees or around $15.