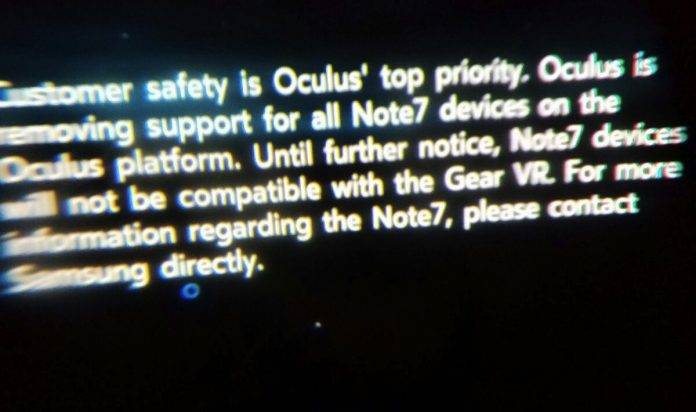 The Galaxy Note 7 brouhaha may be over as Samsung is said to officially stop production, sales, and exchanges of the mobile device. It’s not just temporary but a permanent thing already. We have no idea what are the developments on those reports of new explosions in the United States and Taiwan but we know Samsung is also doing their own investigations.

We don’t know either what will be the long-term effect of this Note 7 situation for Samsung but looks like some services and products will also be affected. Take for example this Gear VR which was disabled for the Note 7. Over at Reddit, Bahaman23 shared that his Gear VR was previously working fine with his Note 7 but after a few hours, the device has been disabled when he tried to connect it to the VR headset. He took a photo of the message prompt that said:

Customer safety is Oculus’ top priority. Oculus us removing support for all Note7 devices on the Oculus platform. Until further notice, Note7 devices will not be compatible with the Gear VR. For more information regarding the Note7, please contact Samsung directly.

So what happened here? We’re guessing that Samsung and Oculus already decided to disconnect the Note7 and the Gear VR to make sure that no further explosions will happen. We understand this because perhaps the two companies are thinking about the safety of the owners and they don’t want to risk overheating especially when the Gear VR is in use.

Note that the Gear VR isn’t problematic but only the Galaxy Note 7. As you know, we can’t be safe and sure with the Note 7 now. It’s actually conscientious of Samsung to do that. No actually, the message appears to be from Oculus so this could be an early effort by the virtual reality tech company.