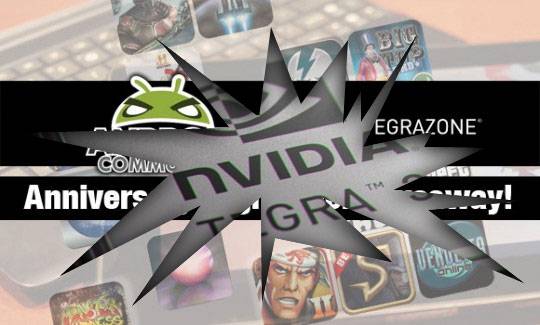 Who is ready to win the ultimate giveaway gaming pack from Android Community and NVIDIA? This is our third and final reminder that you’ll need to quickly enter via the instructions below for your chance to win. Thanks to NVIDIA and their TegraZone one year anniversary we are giving away some good stuff. Have a look at our Transformer Pad TF300 Review, since that is what you’ll be winning then read on below for additional details.

Along with NVIDIA and us here at Android Community, this same giveaway is also being celebrated by our sister site SlashGear. Celebrating an entire year of awesomeness from NVIDIA and their TegraZone.com full of impressive Android games. The full instructions and details will be link to below but for now here’s how to enter from NVIDIA, as well as us. you’ll want to hit the NVIDIA players choice awards voting site, or scan the QR code below to get started.

Then for our side of things it is really simple, you’ll just have to follow the instructions below:

Circle us on Google+ at: +Android Community
– Leave a comment in [this G+ thread] telling us why you think you should win, what your favorite Tegra game is, or what game you’ll play when you win.
Winners will be selected like so: we’ll pick a set of our favorites and put them in a hat to pick at random. We’ll select one a week for 3 weeks.

The NVIDIA TegraZone Anniversary Tegra Pack we’re pushing out to you courtesy of ASUS and NVIDIA consists of no less than an ASUS Transformer Pad TF300, a TF300 keyboard dock, a wireless Logitech game controller, and a Jawbone Jambox Speaker in slimy awesome NVIDIA green. Then when you win you’ll be all set for hours upon hours of Tegra 3 gaming.

For complete details and all the legalities of the giveaway feel free to read over them in our original giveaway post. Then you’ll want to read up on all things Transformer Pad TF300 and NVIDIA from our timeline of news below. Good luck guys!