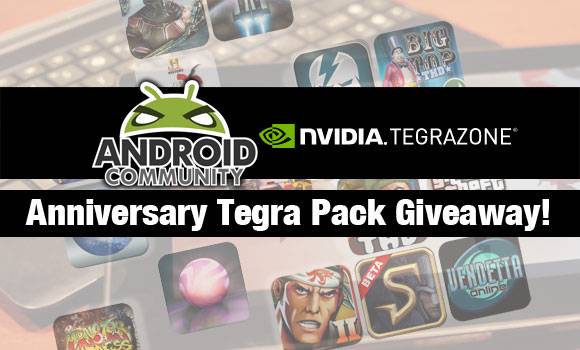 We’re back with another awesome giveaway for all the gamers out there. Android Community has partnered with NVIDIA and ASUS to celebrate the 1 year anniversary of NVIDIA’s Tegra Zone. Just like our previous giveaways this isn’t just a free tablet. We’ll be offering the ASUS Transformer Pad TF300 quad-core tablet, the TF300 keyboard dock, a Logitech Wireless game controller, and even a Jawbone Jambox portable speaker. Add all that up and you get a top quality mobile gaming system that could rival consoles. We will be giving away 3 of these “Tegra Packs” so you have multiple chances to win. Read on for all the details.

UPDATE: Winners have been picked. Congrats to Jordan Hotmann, Cody Van Vactor, and Breanne Perera. Congrats! Thanks for joining us for another Android Community giveaway and stay tuned for more coming soon!!

Over the next few weeks Android Community will be giving away 3 of these ultimate gaming packs to some of our loyal and lucky readers, as will our sister site SlashGear. Along with our giveaway, NVIDIA is also doing the same and will be giving away 7 packs so you essentially have tons and tons of chances to win some Android tablet goodness right here. Our rules are below, as well as what you’ll need to do to win from NVIDIA. They want your input on what the best Tegra game is, and we do too. From ShadowGun to Riptide GP. Tell them for your chance to win.

First have a look at the rules to enter and win from Android Community, then below will be the links for NVIDIA’s side of things.

Circle us on Google+ at: +Android Community
– Leave a comment in [this G+ thread] telling us why you think you should win, what your favorite Tegra game is, or what game you’ll play when you win.
Winners will be selected like so: we’ll pick a set of our favorites and put them in a hat to pick at random. We’ll select one a week for 3 weeks.

It’s just that simple folks. A few clicks and you could be the lucky and proud owner of an awesome quad-core Android tablet ultimate gaming bundle thanks to NVIDIA. Next, you can get even more chances to win by voting on your favorite game (as mentioned above) over at NVIDIA’s TegraZone site itself. NVIDIA is calling this the Players Choice Awards and you can get in on the action by clicking here or by scanning the QR code below with your smartphone or tablet.

If you’ve never experienced the awesomeness that is an NVIDIA Tegra-optimized game you’ll want to check out all of our links and reviews below of multiple impressive games, as well as our full review of the Transformer Pad TF300 and Prime tablets. ASUS also explains it well with this little comment: “Running latest Android 4.0 Ice Cream Sandwich, the ASUS Transformer Pad is a value packed tablet that with multi-color style, and productivity with expandability when connected to the mobile dock. With a 1.2MP front and 8MP rear auto-focus camera with large F/2.2 aperture and exclusive office software, staying connected and productive has never been easier.”

Giveaway begins May 10th and ends May 31st, 12:01AM PST barring any complications finding the winners. All winner will be announced once we’ve contacted and confirmed them here in the main news feed and at our official Facebook/Google+ pages.

Giveaway is open to residents of the US only, over the age of 18. One entry per person. Family members of NVIDIA, ASUS, or Android Community/SlashGear are not permitted to enter. Competition entries are only accepted via the specified Google+ thread; entries left in the comments section of this or any other post will not be recognized.

The winner will be contacted by an Android Community/SlashGear staff member upon being selected and will be expected to respond to that staff member; they will be expected to respond within 24 hours else their prize may be forfeit and another winner selected. Editors decision is final and no correspondence will be entered into. Winners agree that their name and details of their entry may be used for promotional purposes by, but not limited to Android Community, SlashGear, and NVIDIA.

Prize consists of a pack including one ASUS Transformer Pad TF300 tablet, one TF300 mobile keyboard dock, one Logitech game controller, and one Jawbone Jambox Speaker. There is no other alternative for prize winners unless this prize should become unavailable, in which case SlashGear reserves the right to substitute another prize of equal or greater value.