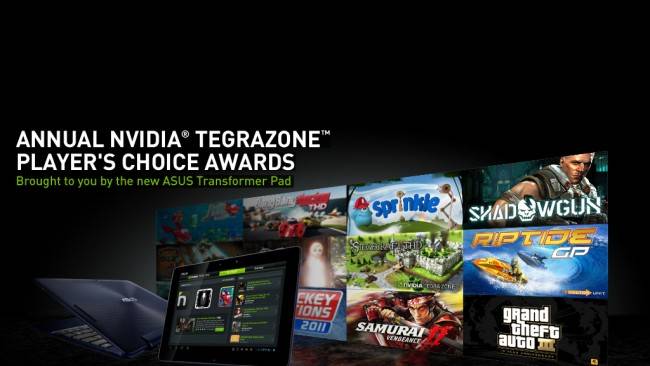 Over the last three weeks of May the graphics guys from NVIDIA were running their first annual Tegra Zone Player’s Choice Awards asking fans of NVIDIA Tegra 2 and Tegra 3 games to pick their all-time favorites. I’m sure you all joined us on our giveaway for the same 3 weeks. To celebrate their first year of Tegra Zone games they had quite the giveaway and award contest for Best Graphics, Best Gameplay and Best Overall — and today the results are in.

Out of all the awesome and impressive NVIDIA THD games the two that topped the charts were SHADOWGUN by MadFinger Games, and Grand Theft Auto III. It’s actually quite amazing just how impressive the graphics from SHADOWGUN really were. It won the award for Best Graphics and if you saw our review or have played it you’d know why.

We actually have an awesome video using the HTC One X powered by NVIDIA’s Tegra 3 quad-core playing both of these games so check it out:

Shadowgun THD won by a landslide for its class-defining graphics. There’s no doubt that Shadowgun THD showcases the upper limit of what’s possible when you take advantage of Tegra 3, the world’s only 4-PLUS-1 quad-core mobile processor. Shadowgun THD offers tons of exclusive content you won’t find on any other platform: water fluid effects, damage and aging effects, and even particle effects, just to name a few.

This category saw some heated back-and-forth between GTA III and Shadowgun THD. Ultimately, GTA III, from Rockstar, came out ahead. Thanks to full-on game controller support on Tegra devices, Rockstar’s hit title was voted tops in Best Gameplay.

This battle was a nail-biter. GTA III and Shadowgun THD duked it out to win the Best Overall crown, but Rockstar’s GTA III squeaked past Madfinger’s third-person shooter to be voted as the Best Overall game in TegraZone. With full 3D stereo (on Tegra devices that support 3D) and game controller support, GTA III is as visually stunning (with HD-quality resolution, updated graphics, character, and vehicle models) as it is fun to play.

The re-release of Grand Theft Auto III for Android devices with full gamepad support, HD graphics, the awesome Chat FM radio and more ended up stealing the show. Technically Shadowgun is a true mobile game but in the end this was all about the player’s and what they loved the most. Both of these games are exceptional and sadly other impressive ones like Riptide GP didn’t make the cut. We’d highly recommend picking up the impressive Transformer Pad TF300 or the new HTC One X and enjoying these THD games in true Tegra 3 quad-core fashion along with the new games revealed at E3 and linked to below. Head to NVIDIA for full details.