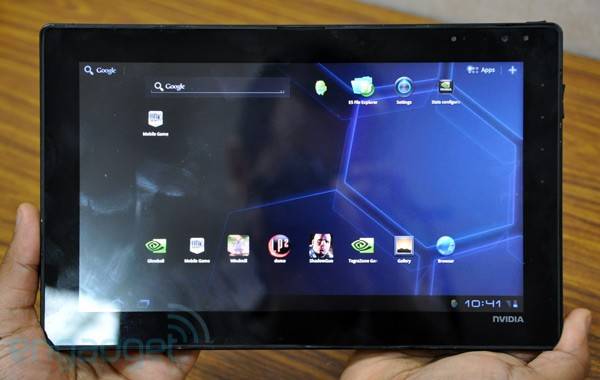 Nvidia has been getting a lot of press lately over the latest Kal-El quad-core chip they’ve got in the works, and with good reason. Simply put it will be a beast. They have been showing it off at Computex as well as some of its graphical powers and you can see more on that here. They’ve also mentioned that Kal-El is on track to be released in the later months of 2011.

It looks like our friends over at Engadget were lucky enough to get some hands-on with the new super device and made a video for you all to enjoy as well. The device shown is just a development platform device and in no way represents anything near a final product. I do see some vents that may hint that it runs a little warm but that is to be expected. Also development chips such as this will see solid performance increases, as well as heat and power consumption decreases by final production. So basically come launch time this Kal-El chip should be just about able to eat your PS3 for breakfast.

The development tablet is running Android 3.1 Honeycomb and is the standard 10.1″ 1280×800 resolution we are currently seeing but that could also change by late 2011. It does feature dual-cameras on the rear for some 3D video capture as well as HDMI out obviously. Without getting into it to much I’ll just post the video below for you all.