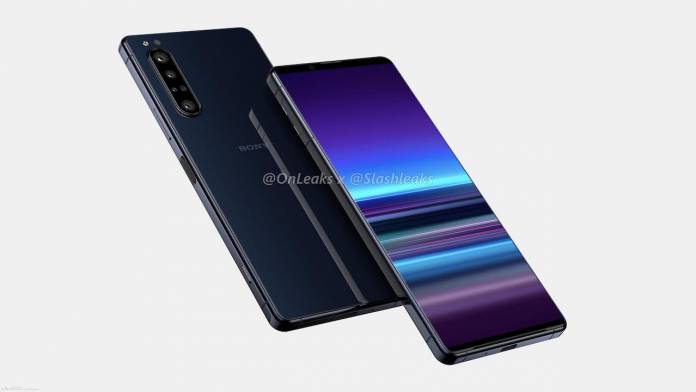 Sony is expected to announce new Xperia smartphones at CES 2020. A number of premium flagships and mid-rangers are lined up for this year including the Sony Xperia 5 follow-up that may be bezel-less with a punch-hole cam. A new Sony Xperia Compact may also roll out soon. The upcoming devices from Sony are believed to use the Sony IMX686 sensor and maybe support for the Sony 360 Reality Audio. The company isn’t as prolific as other OEMs but be know Sony offers fun and innovation with new Xperia phones.

A gallery of renders has been leaked online. The images were created by OnLeaks and SlashLeaks. This is probably the first leak for the 2020 Xperia smartphone. We can see the display is taller so aspect ratio could be 21:9 similar to the Sony Xperia 1, Xperia 10, and Xperia 10 Plus.

Sony may continue with the familiar design but with slight changes to the specs. The boxy shape is still there but smaller bezels may be appreciated. We can look forward to 3.5mm headphone jack, dual front-firing speakers, and a 6.6-inch flat OLED screen. It will only be a mid-range because of the headphone jack and maybe a mid-range processor.

When it comes to the imaging department, the next Xperia phone may come with a triple rear camera system plus a ToF sensor, 8MP selfie shooter, plus a fingerprint sensor on the side. Estimated dimensions are 168.2 x 71.6 x 8.1mm.

Not much information is available but we’re expecting an announcement from Sony at this week’s CES. We can’t wait to see the almost bezel-less display on a boxy design plus the punch hole camera. Cross your fingers.