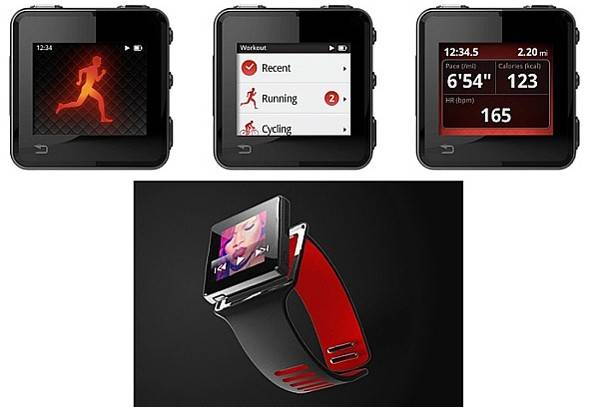 All of a sudden watches are apparently “in.” Just this morning we talked about WIMM Labs’ new “Wearable Android Platform,” and now someone’s sent out images of what is supposedly an upcoming smartwatch by Motorola. Android has been ported to all sorts of devices, obviously none as successful as phones. Will Moto’s latest attempt to push smart device boundaries bring our little green buddy along for the ride?

The watch, potentially called the MotoActive, is not an unheard of concept from Motorola. In June a leaked redesign of Moto’s website featured a watch called the Tracy XL (named after Dick Tracy). This new watch seems to be much more fitness oriented than for fighting crime though.

Let’s take a look at the watch itself. Clearly these pictures indicate a focus on exercise, allowing you to track your jogs and bike rides. We can also pretty clearly see a music app in the bottom pic. The other question here is whether or not this will run Android. While it appears that there is a standard back button in the bottom left corner, its worth pointing out that its a bit different from Moto’s standard version.

Keep in mind that this is all on the word of the tipster who sent released these pictures. The images don’t actually show any Motorola branding and whether or not this watch will run Android is even if it is real isn’t known. We’ll keep an eye out for more info on the future of this or any other Android watches to come.