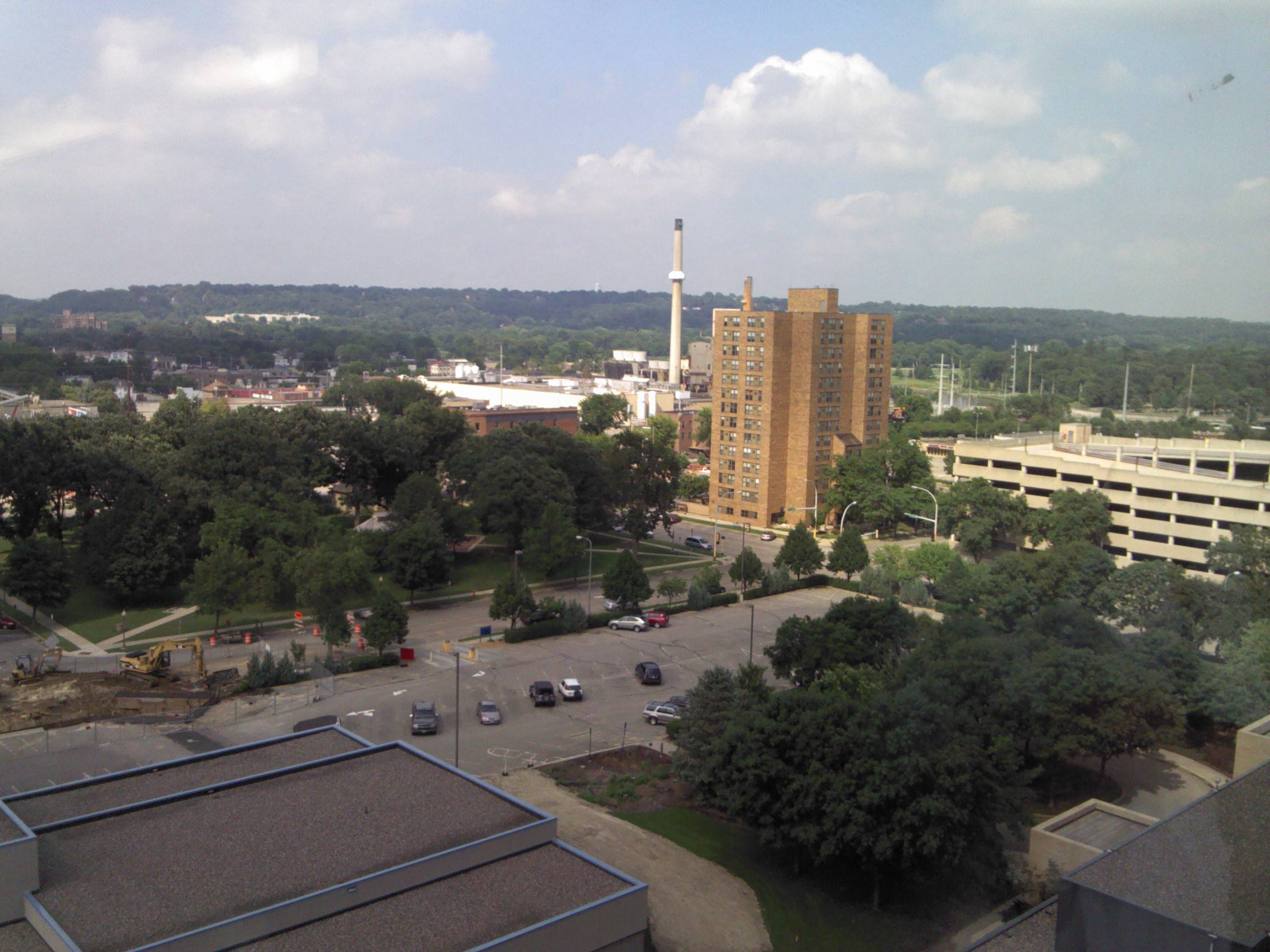 Here’s a Motorola candybar you’re not going to want to miss. This is the first Motorola device to be carried by Virgin Mobile, and the biggest and by far the most impressive Android handset you’re going to be able to purchase off-contract for under $300. Not only that, this device is unlike most Motorola devices in that it’s not running Motorola Motoblur, a user interface that we’ve been told by many of our community members is certainly not their favorite. Instead you’re going to get a Vanilla (aka essentially untouched) look at Android 2.2 FroYo. Is it a winner?

Before we begin, let’s get a tiny bit of hands-on time in a couple of videos. First there’s an unboxing of this device as performed by yours truly just a few days ago. Here you’ll see the actual unit we’re working with for the review actually coming out of the box it actually came in.

Then you’re invited to take another look at the device as it existed several weeks ago when we were introduced to it at a Motorola event in NYC:

Now on to the review! Enjoy this slab of Motorola excellence. 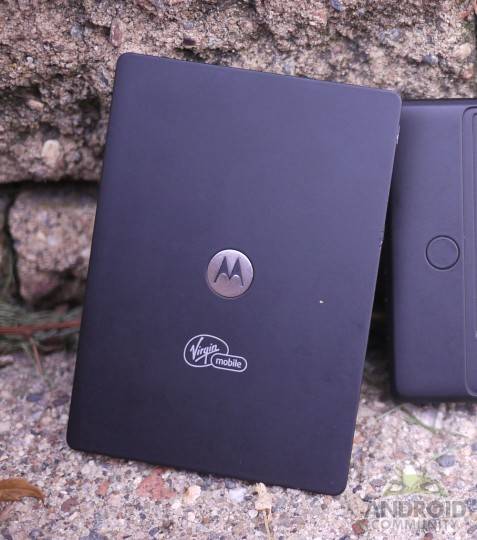 This device is what you’d get if you had a Motorola DROID and took all the hard plastic and sharp edges, replacing them instead with soft plastic and slightly more rounded corners. It’s extremely simple in its form and makes no qualms about being a relatively thin box with a big screen. The display is a 4.1-inch 800×400 pixel resolution WVGA touchscreen that looks generously bright and sharp – it’s no Super AMOLED, but it’s certainly ready to beat out every mid-range device display we’ve ever seen.

When I first got my hands on this device, I looked at it and thought – what is is? There’s gotta be something special about this device, it’s not the best! It doesn’t have the biggest display, the processor is only a single core 1GHz Snapdragon, even the cameras are less than the best at VGA on the front and 5-megapixels on the back. Was it the HDMI port? No, though that certainly was a plus. Was it the Virgin Mobile Live 2.0 app that allows you access to its Virgin Mobile branded music stream as outlined in our original announcement release? I say thee nay! Each of these items certainly makes the phone what it is, but what the phone represents is much more than its physical form. 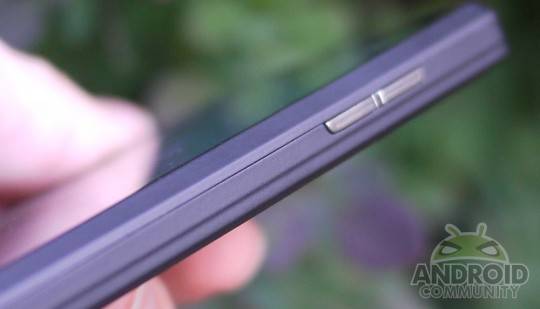 Instead, what you’re looking at here is the best little Android top-tier device to be offered off-contract for under $300 in the USA and Canada today, hands down. This device is weighs in at 143g (5.04 ounces), and its dimensions are 4.8” x 2.5” x 0.4”, it being neither a very larger nor a very small phone, and with a standard set of Android menu buttons at the bottom of the portrait screen, Motorola at the top, a notification light inside the speaker grill above that, some more speakers for entertainment and speakerphone down at the bottom at the left and right sides (unique!) and a great feel in the hand. 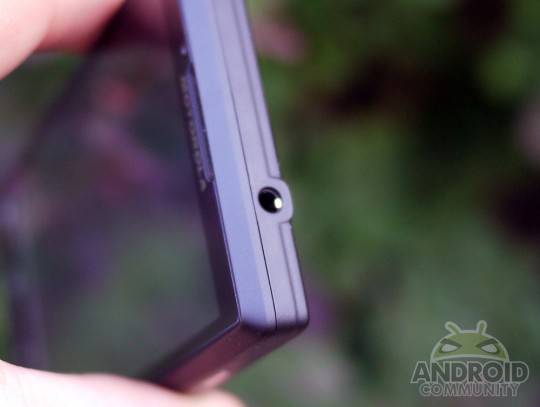 This device is rough and tough, won’t need a case unless you’re the sort of person who bashes their phone in the door regularly, and has a really nice color to it – just so long as you like black. The speakers, again, are excellent. I’m always complaining about how the speakers on a device such as this should, without a doubt, not be pointing BACKWARD as most of these handsets are prone to have happening. This device takes them half way to the correct location planting them on the sides of the device. Yes I realize the speaker grilles are not actually the speakers themselves, but they certainly look and feel like they’re nearly, not quite, but nearly in the perfect location for some screen-up, back-down, awesome tunes action. 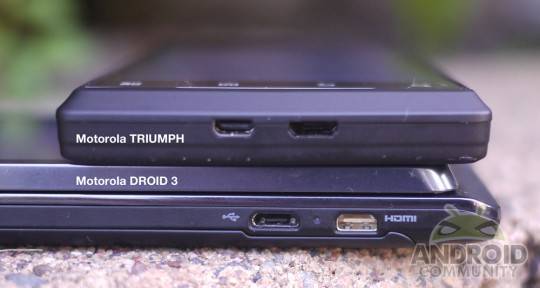 Again there’s a notification light behind the top speaker grille, the power button is on the upper left-hand side of the device while the volume up/down is on the opposite side – strange and welcome locations, and you’ve got both your microUSB and HDMI plugs at the bottom of the device, right where they should be. Inside you’ve got that single-core 1GHz Snapdragon and it’s crackin. 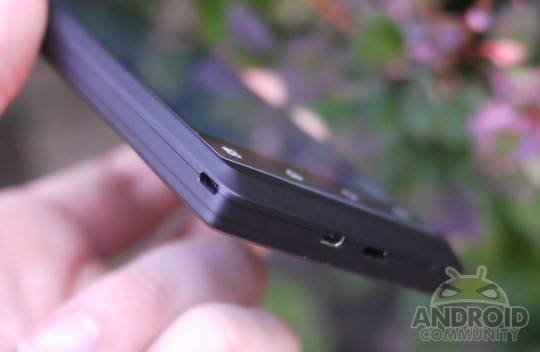 Inside the device you’ve got a full Google experience, with all your regular 20 or 30 Google-required apps sitting right where you expect them, the Android Market in place right beside them. Then there’s some Virgin Mobile apps that’ll connect you to your Virgin Mobile account in various ways, a Virgin Mobile Live, an app with some sweet official Virgin Mobile music and sounds, and a few apps like WHERE, SCVNGR, Poynt, and a shortcut to the airG Chat webpage – each of these apps or shortcuts are essentially invisible to your everyday Android user, and upon tapping them if you’re a user new to smartphones, you’ll find them relatively difficult to get into, as they’re all more advanced applications for those willing to put forth some extra effort to participate.

These apps and the set of only a few portals to Virgin Mobile environments are the only additions Virgin Mobile seems to have added to a very basic Android experience. You’ll open this device up and find Vanilla Android 2.2 FroYo staring you right in the face. Imagine our surprise when we realized the simplicity of the truth. There is no spoon – or should I say, there really isn’t any UI spam. This system runs on a 1GHz processor which, if you’re used to a dual-core now that they’ve been out for a few months, might seem a little sluggish to you. However, because you’re on a nude version of Android, the sluggishness you’re feeling is only because you’ve been cruising so very hard with that next-gen device. In reality this little ditty is going just as fast as you please with basically any app or piece of media you please. 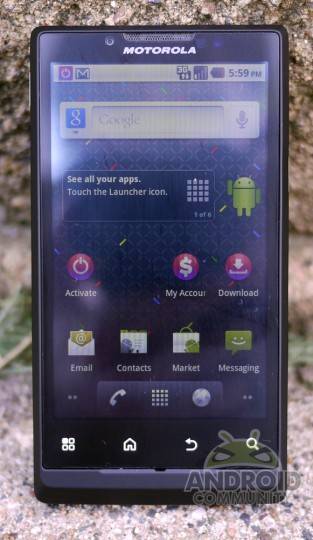 Again you’re not going to be beating all your friends like Simms22 at any benchmark battles, but you’re no small customer with this device either. Have a look at some general results we got with several updated tests: 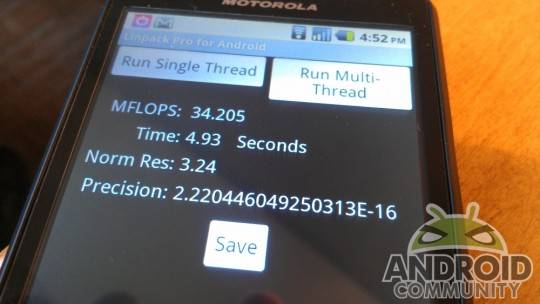 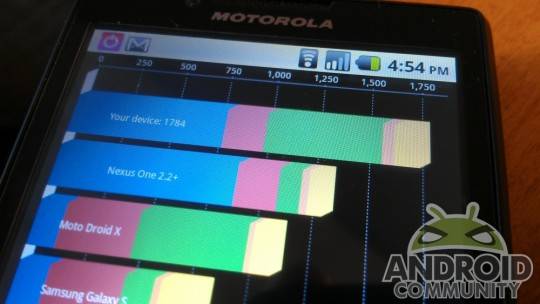 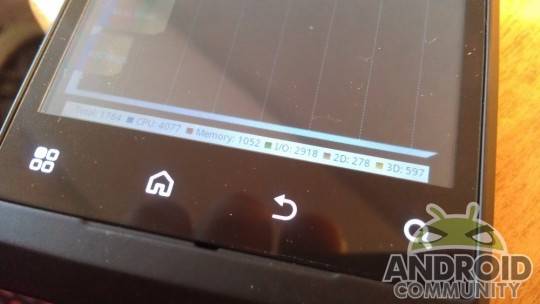 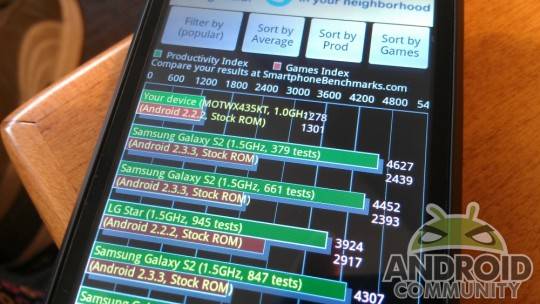 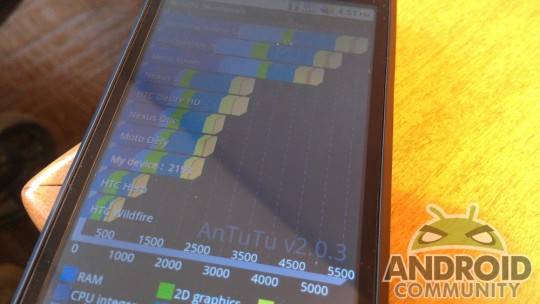 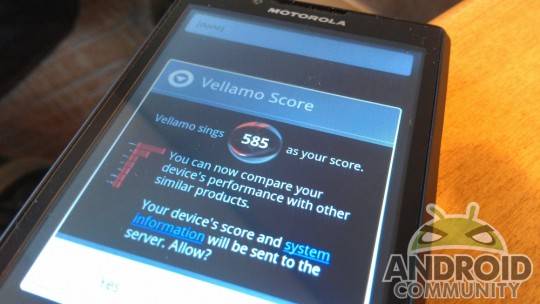 Get a bit more information on Vellamo and why it’s awesome right here. 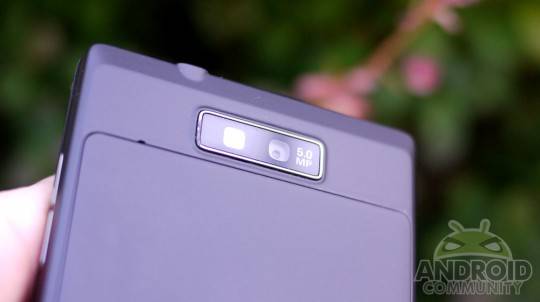 The back-facing camera is a VGA-grade photo and video camera, and isn’t worth using unless you’ve got some plans to enter into some video chat. Beyond that you’ll probably never use it ever. The back-facing camera is a 5-megapixel photo and 720p HD video shooter, and it’s pretty darn nice. Have a look at a couple examples shot out of a hospital window on a nice summer day this past week: 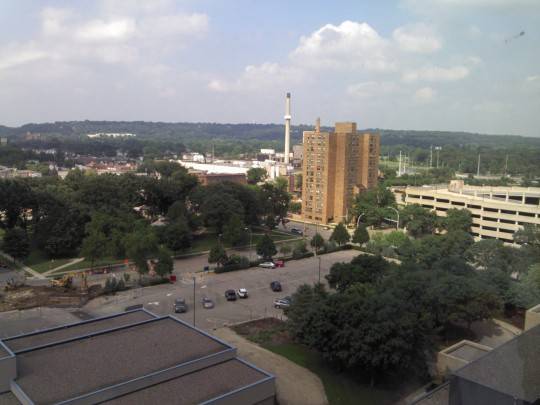 Phone call quality is perfect, no complaints, Virgin Mobile doesn’t have the largest coverage area in the nation, even with their parent company’s coverage, but we’ve rarely gone to a place where service wasn’t still full bars – and it’s 3G for data incase you hadn’t guessed, again not the fastest, but still relatively nice. The battery has lasted approximately a day at a time from full charge to nothing with medium use, par for the course for all modern mid to top-tier handsets. 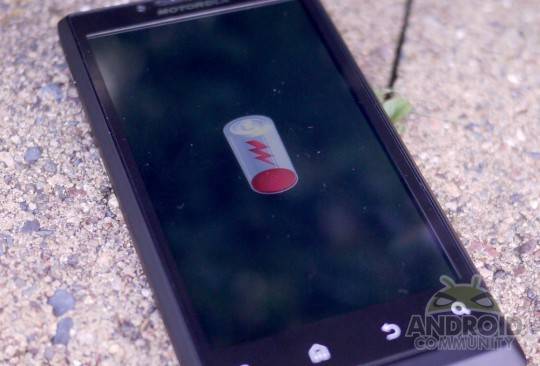 You’re going to want to know all about what you’re getting into here for cash per month since Virgin Mobile has made this phone at least in a large bit all about the fact that you can purchase it off-contract. What does that mean for you when you’re purchasing data from Virgin Mobile by the month, month to month? Have a look at how you’ll be paying $55 for unlimited everything per month, but beware the data throttling starting in October – important only if you plan on using your data a LOT – or a medium amount, depending on the kind of person you plan on being.

This is an Android device for people who want to experience the very center of Android regularity, not the nicest in the world, nor the worst by any means, and with a no-contract deal, easy to abandon in favor of a different device should one want for a much more extravagant device. This handset is a really excellent path into Android for absolutely anyone, giving the user the full Android experience without breaking the bank or turning them away due to shotty cheap hardware. This is a device you’ll very possibly keep for several years before you upgrade, and more than likely you’ll still keep it around for some odd Android Wi-Fi-only activities after that – music, games, movies, and photos, anyone? 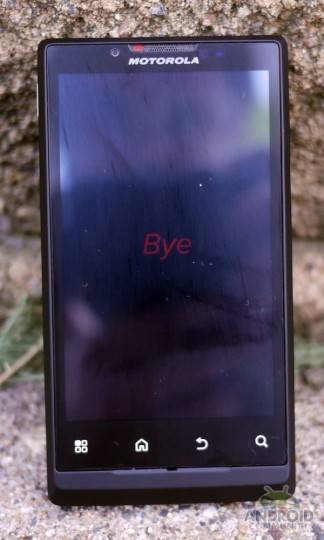 This device is extremely important for Virgin Mobile as it’s not just another trackphone that people will easily toss out when they don’t want to work with it anymore. Instead is a product that people will want to use and will want to continue to use paying for Virgin Mobile service as they do so. While devices like the LG Optimus V may linger, it’s this top-tier device at a mid-range price that’ll dominate Virgin Mobile’s sales ranks for Android in the near future.