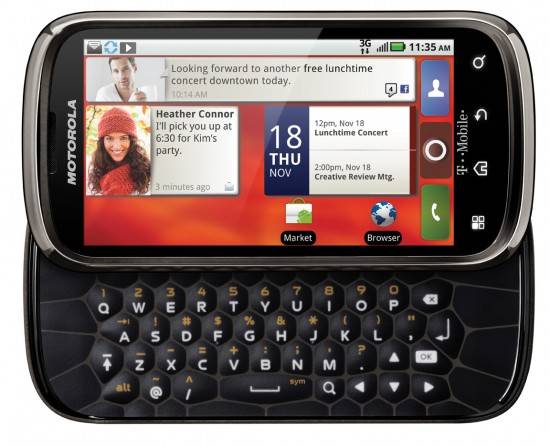 I’ve got some wonderful news for the eight people that still own a Motorola Cliq 2 on T-Mobile! Your prayers have been answered, and you’ll soon be getting an official update to Android 2.3 Gingerbread. All it took was 13 months after the Cliq 2’s January 2011 release, and a full 14 months after the availability of Gingerbread itself. So…. hooray. If you’d like to get in on the action a little early, you can head over to the official Motorola forum and sign up to beta test the update for the manufacturer. The new software still includes the MOTOBLUR UI layer.

The Motorola Cliq 2 was released on January 19th, 2011 as a mild refresh of the original Cliq, including its sliding QWERTY keyboard. The screen was bumped up to 3.7 inches with a resolution of 854×480 (the same size nad density as the original DROID) with a 5-megapixel camera and Android 2.2, which at the time was downright timely. T-Mobile was the only US carrier to bite, though it seems to have hit its end of life between then and now – likely superseded by phones like the MyTouch Q by LG.

Motorola has been getting a lot of flak lately for its poor update schedule, thanks to the reveal that most of its high-end phones wouldn’t be seeing Ice Cream Sandwich until at least the summer of 2012, and probably longer. Updating a year-old phone with year-old software isn’t likely to change that perception. All this is set to the backdrop of Google’s acquisition of the American company, which seems to clash with their continuing habit of poor support and locked-down software. We can only hope that the big G will be a positive influence of Moto’s customer-facing policies, but that seems less and less likely as the acquisition begins its final stages.