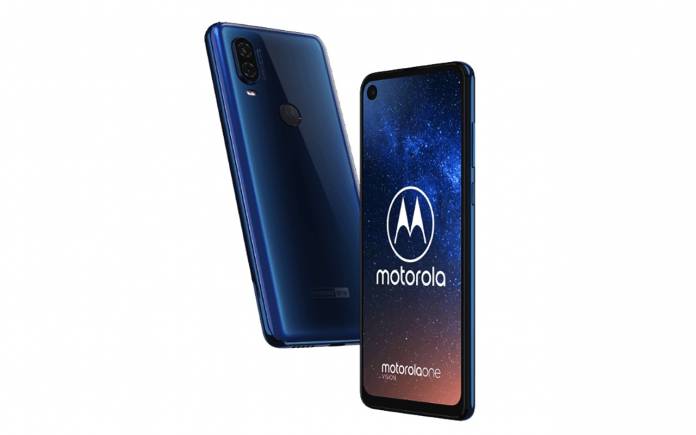 The Motorola One series is getting another addition. The new line from Motorola will be joined by the Motorola One Vision set in blue and brown. The next Android One phone is being prepped for release as a follow-up to the Motorola One and Motorola One Power. The unannounced smartphone has been rendered recently and the images give us an idea how the phone will appear at launch. We’re still taking things with a pinch of salt but we know the rendered images are close to the real thing.

Motorola’s One Vision is said to come with a 6.3-inch LCD screen with 2520 x 1080 pixel resolution, CinemaVision screen, 21:9 aspect ratio, and 432 PPI. The CinemaVision is great for watching movies because they can be shown without the black bars.

Other specs include the following: Samsung Exynos 9609 chipset, 4GB RAM, 128GB onboard storage, microSD card slot for memory expansion, Dual SIM support, 48MP camera with night vision mode on the rear with F/1.7 aperture and OIS. The phone camera system includes the Night Vision feature, AI filters, 4K video recording up to 30fps, and Full HD video up to 60fps. The selfie shooter is a 25MP camera with f/2.0 aperture plus another 5MP camera. We’re looking forward to that long camera exposure

Motorola is said to sell the Motorola One Vision for €129.99 starting May 16, 2019. The front display shows a punch hole camera so expect an almost bezel-less screen. The next Android One phone from the Lenovo-owned company is also said to include a long exposure camera mode.